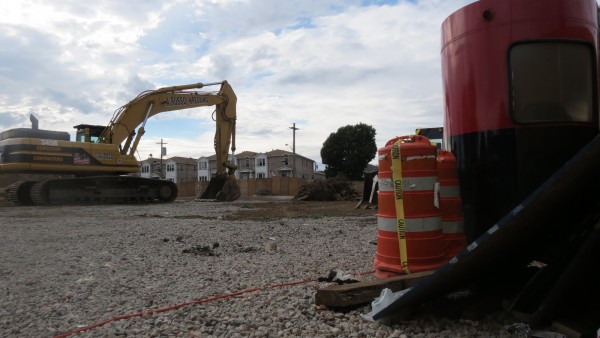 A new public primary school will be built on this lot at Albert Road and 99th Place.
Photo by Michael V. Cusenza

The city School Construction Authority indicated last week that the new public school designated to be built on an empty lot in Ozone Park is approximately 60 percent of the way through the design phase.

Public School 323, a Community School District 27 institution that will serve approximately 504 students in grades Kindergarten through 5th, will be located on the south side of Albert Road between Raleigh Street and 99th Place. With construction scheduled to start in September 2015, doors are due to open in September 2017, according to Mary Leas, director of external affairs at SCA.

“I know you probably have construction fatigue—and now here we go, we’re bringing in a school,” Leas laughed as she addressed Community Board 10 last Thursday at their monthly meeting. “But anything we can do to minimize the noise, we will.”

Community Board 10 Chairwoman Betty Braton noted the unique design of the building.

“[City] Councilman [Eric] Ulrich has been superb in making sure this wasn’t a cookie-cutter design,” she said.

Chief among concerns voiced by several board members and parents in attendance were security, traffic and parking.

“Believe me, [security] is a top priority for the Department of Education,” Leas noted. “Security has been an issue in the last year. We’re constantly working with security and trying to find more ways to address that concern.” Leas said the perimeter of the school will be surrounded by an 8-foot high chain-link fence, and the playground will feature a 15-foot chain-link enclosure.

Leas indicated that there will be no parking allowed between the hours of 7 a.m. and 4 p.m. on school days in front of the building.

“We all know how valuable parking is,” she said with a knowing smile.

As far as conditions, the board asked that the school be zoned for the Centerville neighborhood in which it’s being erected, that SCA and DOE listen to any of the board’s concerns during the design phase and that the school be named after the late Howard Beach civic leader and CB 10 member Art Beroff.

“It’s wonderful that the school is being named after him,” said Carole Beroff, Art’s widow. “The building is gorgeous. And a hundred slots for autistic kids—really terrific. On behalf of our family, we really support the school and thank you very much.”