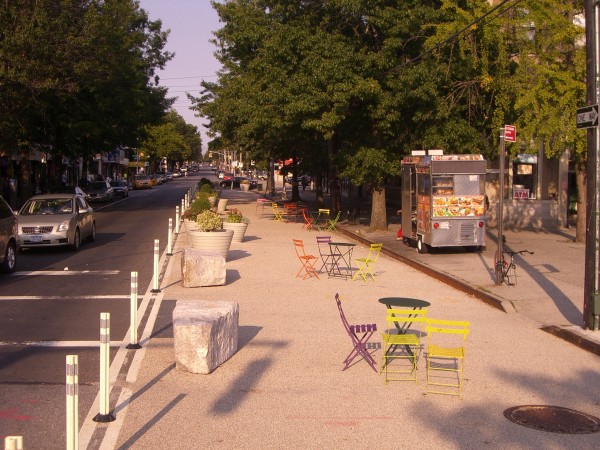 The city DOT has decided to pull back a portion of the pedestrian plaza on 101st Avenue to restore metered parking spaces.
Photo By Michael V. Cusenza

The city Department of Transportation last week told The Forum that, after a lengthy study, the agency has decided to scale back the pedestrian plaza in Ozone Park near City Line.

For months, the DOT and civic leaders have heard myriad complaints from small business owners in the area regarding the open space on 101st Avenue at Drew Street and Liberty Avenue. Many have said the plaza has greatly affected their bottom lines.

According to a DOT spokesperson, the department will pull back a portion of the plaza on 101st Avenue to restore metered parking spaces along the block. The change is expected to take place before the end of the year, weather permitting.

A small step, but one the business owners undoubtedly hope will lead to a restoration of clientele.

In August, several area entrepreneurs attended a special meeting at Borough Hall during which they raised many concerns, including how, in their view, the new one-way traffic pattern has put a dent in their customer bases.

Khemraj Sadoo, owner of Ozone Park First Class Laundry, which is directly across the street from Ali’s store, provided several water bills as evidence that his livelihood has taken a massive hit as a result of the installation of the nearly year-old plaza. “It’s killing the very existence of my business,” Sadoo said in August, adding that he estimates that he has lost approximately one-third of his revenue over the last eight months.

Part of the DOT’s six-month study employed tools such as time-lapse video to get a sense of the space and how it might be affecting its neighbors.