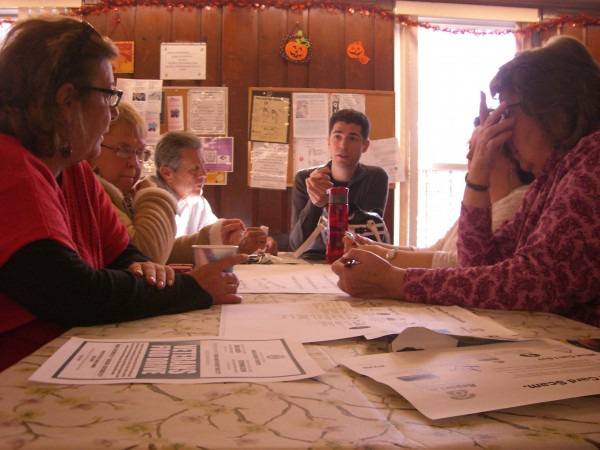 One of four groups on Saturday at the WRBA meeting that discussed ideas on how to use $2 million of taxpayer money on district 32.
Photo By Michael V. Cusenza

This is the fourth consecutive year that City Councilman Eric Ulrich (R-Ozone Park) has let constituents decide how to spend $2 million of taxpayer money on district capital needs. Ulrich was one of the initial four council members to implement PB in 2011.

“Participatory budgeting encourages a greater partnership between communities and elected representatives to find creative solutions for neighborhood needs,” Ulrich said in a statement. “As I have always said, this isn’t my money, it is the taxpayers’ money and they should be allowed a say in how it’s spent.”

The planning sessions provide a venue where the community can gather, discern local needs, and suggest capital ideas for parks, schools, libraries, and other projects. Last Saturday WRBA members split up into four groups to discuss organizations and areas throughout Woodhaven in which the money would serve the greatest good. Some of the ideas bandied about included lamps in Forest Park; funds to repair the Woodhaven-Richmond Hill Volunteer Ambulance Corps building on Jamaica Avenue; a Sept. 11 memorial at the Bandshell in Forest Park; electronic information boards and displays on Jamaica Avenue; repairing and illuminating the clock tower on Atlantic Avenue; medians along Woodhaven Boulevard; and speed bumps on 91st Avenue.

“Participatory Budgeting is a good exercise in that it gets people involved in the spending process and puts them in the position of making tough choices,” said WRBA member Ed Wendell. “At our table alone, I thought there were seven or eight really good ideas, all worthy of consideration.”

To increase participation, Ulrich has begun to place suggestion depository boxes, or “PEEBIEs,” at more than 30 locations including libraries, churches, synagogues, and small businesses throughout the district where residents can submit ideas or feedback. Suggestions can also be made to Ulrich via mail, phone, or through social media.
In January, budget delegates from the neighborhoods in Community Board 9 and Community Board 14 respectively will meet and vet each suggested project with the appropriate city agency. Residents can vote on projects to receive funding starting in April 2015.

“It’s not every day that residents have a direct say in how city funding is spent,” said WRBA Communications Director Alex Blenkinsopp. “We at the WRBA are big proponents of empowering residents. This is a great example of it.”