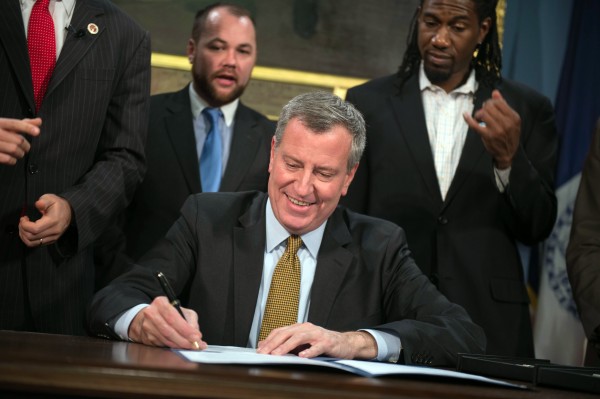 Intro 361-A requires the Department of Homeless Services to grant a presumption of eligibility for applicants to the shelter systems who are exiting Human Resources Administration domestic violence shelters.  The legislation allows, by granting a presumption of eligibility, a smoother and quicker transition to permanent housing for New Yorkers affected by domestic violence.  More than a quarter of families living in NYC homeless shelters cite abuse as the cause for their stay.

“There is no doubt that survivors of domestic violence are often times among the most vulnerable members of the shelter population,” said Council Member Corey Johnson, the bill’s sponsor. “However, they also come up against more barriers than others, largely due to the time limitations on stays in domestic violence shelters.”  Council Member Steve Levin, Chair of the General Welfare Committee, call the bill “a common sense piece of legislation.”

Intro 216-B triples the number of accessible pedestrian signals installed annually, by requiring the Department of Transportation to increase the number of accessible pedestrian signals, or APSs, installed each year from 25 to 75.  APSs are devices that communicate information about the Walk/Don’t Walk intervals in non-visual formats to pedestrians who are blind or who have low vision.  There are approximately 360,000 New Yorkers with visual impairments.  The additional signals will be installed as part of de Blasio’s Vision Zero plan, which aims to end traffic-related deaths entirely.

Intros 356-A and 493-A codify the reporting requirements of the Mayor’s agency-based voter registration directive, requiring the Mayor’s Office of Operations to submit a bi-annual report to the City Council, expand the number of agencies required to participate in the voter registration form distribution program, and enhance the responsibilities of participating agencies.

“Every time a New Yorker interacts with government, they will be empowered to participate in their democracy,” said Council Member Ben Kallos, Chair of the Committee on Governmental Operations and a bill sponsor. “Voting is the bedrock of our community: It is how we as New Yorkers demand our rights and make our voices heard.  The Expanded Agency-Based Voter Registration Law will take us one step closer to the goal of every eligible New Yorker being registered to vote.”

Council Member Jumaane Williams, Deputy Leader and Chair of the Council’s Housing and Buildings Committee, also a sponsor, said, “Voter participation in New York is at an all-time low, and more must be done to make voter registration more accessible.  Government has a responsibility to maximize the potential of voter turnout.”