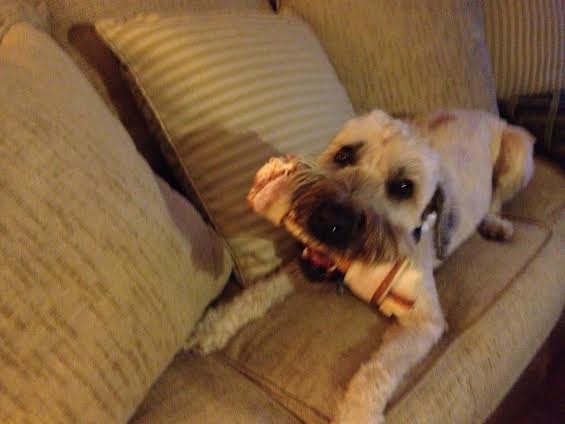 Murphy was discovered just a few feet from his home on 96th Street.
Photo Courtesy of The Hofmanns

It seems that Christmas came a bit late this year for the Hofmanns of Howard Beach.

But if you ask Billy, his wife Susan and their son Christopher, the gift they received on Monday was worth the wait.

After a frantic four-day search, Murphy, the family’s beloved Irish Wheaten Terrier, was found alive and well—if malodorous and hungrier than usual.

“Unbelievable,” an exhausted yet ecstatic Billy Hofmann said just minutes after being reunited with the 9-year-old dog that was given to him by Susan and Christopher on Christmas Day, 2005. “Great, great news… we’re so happy.”

On Christmas morning, Susan let Murphy out in the yard to play. After about an hour, the energetic dog still had not scratched on the back door, which is how he would normally indicate that he wanted to come back inside the house. With no sign of Murphy in the yard or driveway, and after noticing that the front gate was now open, Billy and Susan walked up and down their 96th Street block calling his name. This wasn’t unusual—Murphy had run out before, but only to neighboring yards and front steps.

About five hours later, Billy said he grew anxious and feared the worst: that Murphy had been snatched from his own home. This kicked off days and nights of searching, posting fliers on anything that was nailed down, forlorn Facebook posts and a couple of false alarms.

On Monday afternoon, John, who lives a couple of doors down from the Hofmanns, noticed something moving inside the run-down 1972 Chevy Nova in his neighbor’s driveway. It was Murphy; he apparently had gotten inside the car through a hole in the rotted out floorboards.

Billy and Susan fed Murphy, then took him to the vet to be examined.