Law enforcement personnel from all over the country paid their respects to the fallen Finest at Christ Tabernacle Church on Myrtle Avenue.
Forum Photos by Robert Stridiron

Tens of thousands of mourners last Saturday morning turned out in Glendale to pay their last respects to a city police officer who along with his partner was gunned down in Brooklyn on Dec. 20.

City cops, community members and law enforcement officials from across the country packed Christ Tabernacle Church and surrounding streets for the funeral of Rafael Ramos, 40, who was posthumously promoted to detective first grade by NYPD Commissioner Bill Bratton.

Ramos and his partner, Wenjian Liu, 32, were ambushed as they sat in their marked vehicle outside a Brooklyn housing development by a crazed gunman in what he characterized on social media as an act of vengeance on behalf of unarmed black men recently killed by cops. 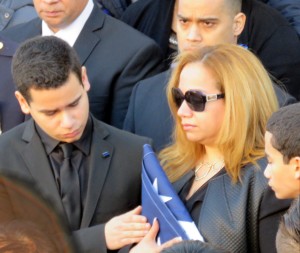 Ramos is survived by his wife and two sons.
Forum Photos by Robert Stridiron

Ramos, who is survived by his wife and two sons, was eulogized by Vice President Joe Biden, Gov. Andrew Cuomo, Bratton and Mayor Bill de Blasio. City cops turned their backs on de Blasio for the duration of his remarks.

“His life was tragically cut short,” de Blasio said of Ramos, “but his memory will live on in the hearts of his family, his congregation, his brothers and sisters of the NYPD, and literally millions of New Yorkers. We will not forget. “