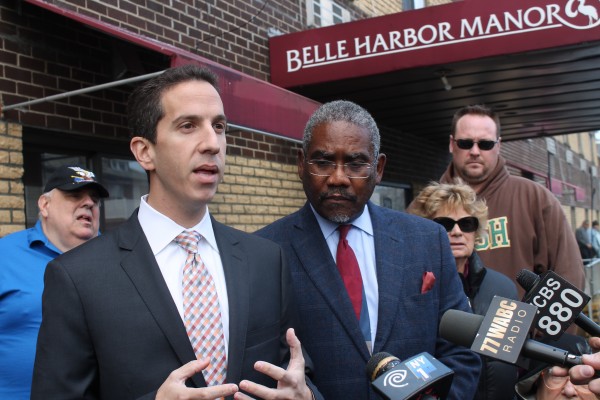 Elected officials last week announced that the Federal Emergency Management Agency would stop the Superstorm Sandy recoupment action for more than two-dozen residents at an assisted living facility in Rockaway.

Last November, residents in some of the hardest hit areas of the city were told by FEMA to retroactively pay back thousands of dollars in Sandy aid—despite the money being used on recovery efforts.

In FEMA’s notices, which arrived long after tenants had spent the funds to get back on their feet, the agency stated that the aid was supposed to be used solely on temporary housing. However, Belle Harbor Manor residents moved around to different state-funded shelters after the storm, and needed to use the money to purchase other necessary items, like food and clothing.

U.S. Sen. Charles Schumer (D-New York) and Assemblyman Phil Goldfeder (D-Rockaway Beach) said last week’s good news would also be delivered in the form of letters from FEMA to 30 elderly residents of Belle Harbor Manor on Beach 125th Street stating that they have officially stopped the recoupment action, the debt has been cancelled and all collection activity has ceased.

Schumer and Goldfeder, in letters and outreach to FEMA, explained that many of the Belle Harbor Manor residents involved in the recoupment live on a fixed income and are still feeling the financial effects of Sandy. They made clear that it would be nearly impossible for these tenants to pay thousands of dollars to FEMA.

“I’m pleased that FEMA has decided to do the right thing at least for the residents of Belle Harbor Manor, but every family deserves relief. Our local families that received additional FEMA aid through no fault of their own should not be subjected to recoupment. I will continue to work with Senator Schumer until all our families have the assistance they need and deserve,” Goldfeder said.

Around Thanksgiving, U.S. Rep. Gregory Meeks (D-Jamaica) said that he would be leading a bipartisan effort to forgive Sandy disaster-relief debts. Meeks indicated that he and U.S. Sen. Robert Menendez (D-New Jersey) would draft legislation to provide relief for storm victims who owe FEMA.