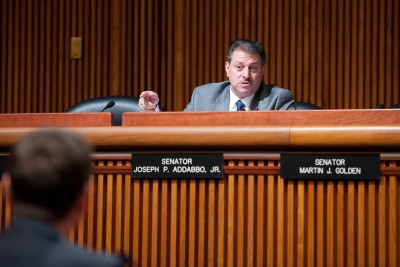 An area elected official late last month seized the opportunity during a joint state Senate committees meeting on cyber security to question an expert witness about the potential for cyber criminals to hack into aircraft operating systems at nearby John F. Kennedy International and LaGuardia airports.

The hearing—a joint effort of the committees on Codes, Consumer Protection, and Veterans, Homeland Security, and Military Affairs—invited public comment on four pieces of cyber-security legislation recently approved by the Senate with the support of Sen. Joe Addabbo, Jr. (D-Howard Beach).

The bills, according to Addabbo, seek to strengthen New York’s criminal law to better recognize cyber terrorism; increase penalties for computer crimes designed to cause financial harm to others; require a comprehensive cyber-security review by state agencies; and create a state cyber-security information sharing program, modeled on a federal initiative, to better coordinate public and private sector responses to cyber threats.

While Freese acknowledged that the growing use of information technology leads to a growth in these and other types of risks, he expressed confidence that susceptibilities are low for this kind of aircraft tampering.  Freese credited this to the ongoing work of FAA regulators, safeguards being implemented by aircraft manufacturers, extensive testing protocols to determine whether a system is “hackable,” and the fact that the required use of two co-pilots on United States airplanes ensures real-time, human monitoring of potential malfunctions.
“With two airports in Queens, I was glad to hear that these risks are not considered top-priority threats right now, but I am pleased that the FBI and other cyber security agencies are aware of the claims and are investigating,” Addabbo said. “In the wake of Sept. 11, we remember all too well the indescribable devastation that can occur when aircraft are used as weapons.”