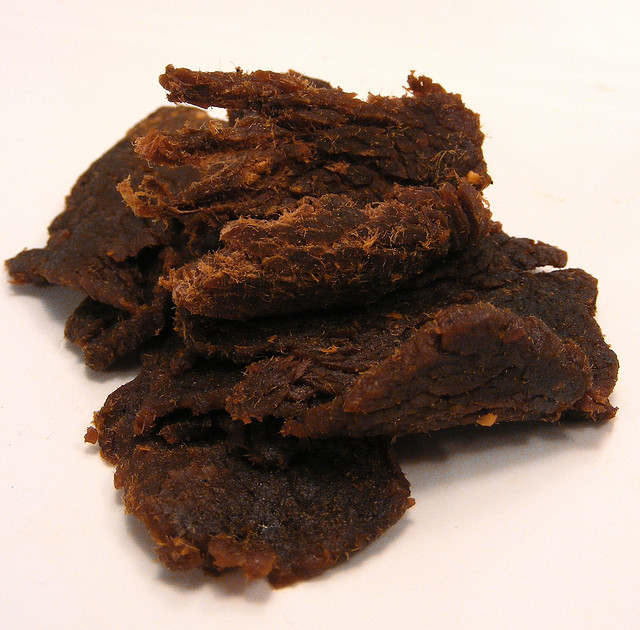 The other day at a nearby Howard Beach grocery store, a customer/writer was alarmed to discover that her small package of beef jerky, meant to serve as a light snack, cost a whopping $8.79 before tax. She bought it anyway, and it was delicious.

But why spend $9 on unknown meat dried with unknown preservatives, when you can make your own healthier version, impress your friends, and learn a new skill for less?

Jerky can be made from any lean meat, and you don’t need a dehydrator to make it. If you’re choosing beef, most people go with brisket or flank steak, but other cuts will work; the key is to remove all visible fat before getting started. If you leave fat on, the jerky will spoil more quickly.

Just about any meat can be used to make jerky, but the leanest cuts should be selected and all visible fat trimmed off. Photo Courtesy of rachelent1, Flickr.com

Some jerky-makers use small, flattened slabs of meat two to three inches wide. The standard, most effective size to make your jerky is in thin strips (1/2”) less than 1/20” thick. The meat can be frozen beforehand for a few hours to make it easier to slice.

Some people opt to marinate the meat first for up to 24 hours, for enhanced flavor. Numerous marinade recipes can be found online, with liquid bases of vinegar, Worcestershire, pineapple juice, or beer. This is an optional step, as the additional moisture can make the dehydration process take longer. Asian-style jerky might have ginger or lime in the seasoning, while African jerky might have clove and cumin. Dried spices should be added as a rub right before dehydrating the meat. Don’t be afraid to experiment with seasoning combinations.

Space out the meat adequately on cooking spray-coated racks of a dehydrator. (Dehydrators start at around $40 for small ones and go up to around $200 for large professional ones. You can also build your own solar dehydrator…if you’re bored.) After two hours, the consistency of the jerky needs to be checked every thirty minutes. To do this, check a piece by cutting into it. The color should be like dark chocolate or prunes. Depending on the meat’s consistency, the process will take up to six hours.

If you don’t have a dehydrator, use an oven set to 165˚ F, just hot enough to destroy bacteria and allow the moisture to evaporate, but not so hot as to actually cook the jerky. In using an oven, the jerky should be placed on a wire rack with a tray underneath to catch drippings. Ovens cut your drying time exactly in half, with the process ranging from 1-3 hours. In this case, the jerky should be checked after 90 minutes, and then every 30 minutes thereafter.

The fresh jerky should be placed in airtight containers (like mason jars) or be vacuum-sealed, then put in the refrigerator for up to two weeks, or in the freezer.

You may be looking for a sweet follow-up to your spicy jerky. Ice pops — which are becoming more and more ubiquitous in hipster-run artisanal food shops — can be made quickly and easily in your own home using just about any ingredients you choose.   Looking for something creamy? Use avocado, banana, yogurt, or all three. Into the juicing trend? Make your own veggie juice and freeze it into a pop. If you don’t have pop molds, you can use paper cups or even a loaf pan. (As the mixture freezes, put in popsicle sticks, then slice the loaf like bread to serve the pops.) Get kids involved by asking them to select ingredients like fresh fruit chunks, or layer the pops (freezing one ingredient at a time) for a fun and colorful snack. Looking for more of an “adult” ice pop? Wine and beer freeze well (think: sangria pops for that Fourth of July party coming up), and liquor like Bailey’s and Kahlua will freeze in moderate amounts. The key is to blend ingredients well to avoid making pops laden with ice crystals.

As you prepare your own jerky and ice pops, the key is to enjoy the experience; always an ingredient in the best recipes, fun will make your creations even more delicious.

Home-made ice pops, like the peach and kiwi ones shown here, can be made with a variety of sweet, or even savory, ingredients such as fresh whole fruit and herbs. Photo Courtesy of Jennifer Chalt, Flickr.com 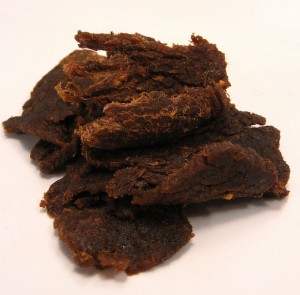 Sichuan-style beef jerky can be made easily in your own home, without a dehydrator. Don’t forget the Sriracha sauce! Photo Courtesy of Robin, Flickr.com