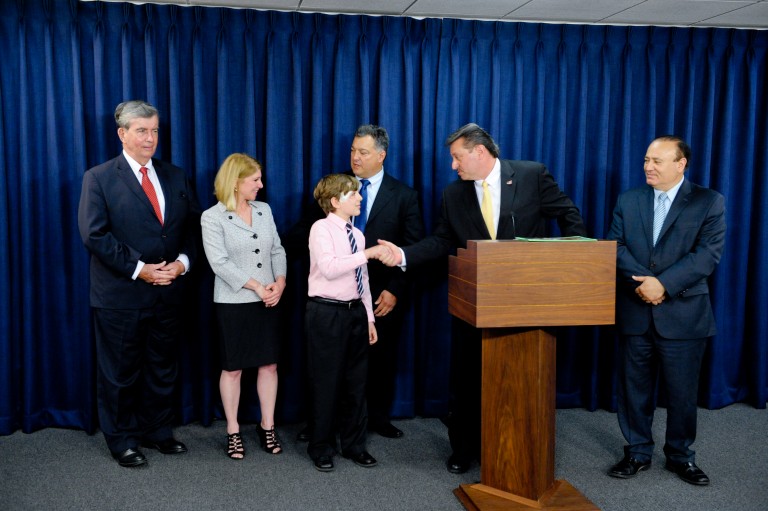 He had four sections of his head removed down to the skull, and more than 1,000 stitches to suture some of the 100 lacerations. Doctors were forced to put donated skin on his head, until his own flesh and tissue repaired itself. Part of Frankie’s right check had to be removed, leaving him with missing nerves, tissue, and glands. He also was left with some permanent hearing loss, among other lasting effects of the vicious attack.

Since that spring day in 2009, Frankie has undergone more than 30 medical procedures, and is facing even more in the future.

However, Frankie and his mom, Maria, have used the tragedy to educate and advocate. They recently trekked up to Albany to continue their push for “Frankie Flora’s Law,” which would hold dog owners legally accountable if their animals seriously injure other people or pets.
Owners would be required to pay the medical bills of both human and companion animal victims of dog bites, even if it is a first incident, according to state Sen. Joe Addabbo, Jr. (D-Howard Beach), who met with Frankie and Maria at the State Capitol to promote passage of the bill, which is currently under review in the respective Judiciary committees of both the Senate and Assembly.

More than 4.5 million people are bitten by dogs every year, according to the American Veterinary Medical Association, with about one in five victims requiring medical attention; about 27,000 require reconstructive surgery. Children are the most common victims of dog bites, and far more likely to be severely injured.

State law does not now hold the owners of vicious dogs liable for the injuries they inflict on people or other animals unless it can be proven that the pet has a history of dangerous behavior and that the owner is aware of it.

“This legislation will help to promote responsible dog ownership and socialization while ensuring that New Yorkers who are seriously injured by dog bites do not face the added pain of trying to shoulder highly expensive medical bills on their own,” said Addabbo. “In addition, this proposal will also provide some measure of financial assistance for people whose own companion animals are viciously attacked and injured by dangerous dogs. Simply put, dog owners need to be held accountable for the unprovoked
actions of their animals, especially when their dog’s behavior ultimately causes grievous harm to others.”