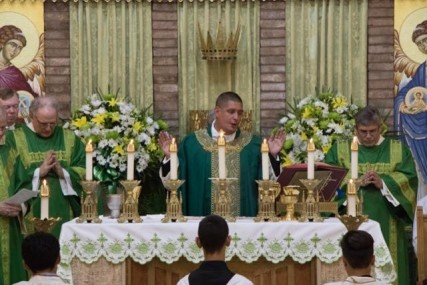 Though he has already established himself as a leader in the community since arriving back in February, Fr. Francis Colamaria last Saturday was installed as pastor of St. Helen Roman Catholic Church.

“It’s the official taking possession of the parish…the giving over of the pastorate,” he noted of the ceremony that was officiated by Bishop Octavio Cisneros.

Colamaria comes to Howard Beach from Holy Child Jesus Church in Richmond Hill, where he led the faithful for more than six years. He took over at St. Helen for Msgr. Alfred LoPinto, who has moved on to Catholic Charities as vicar for Human Services, Diocese of Brooklyn; and chief executive officer for Catholic Charities Brooklyn and Queens and related agencies.

Born and raised in Brooklyn, Colamaria attended Xaverian High School, St. John’s University, and Immaculate Conception Seminary in Huntington. He was ordained a priest in 2001.

Before arriving at St. Helen, Colamaria served as parochial vicar of Nativity of the Blessed Virgin Mary parish in Ozone Park, parochial vicar of St. Ephrem parish in Dyker Heights, and administrator of Holy Child Jesus. He also is deputy chief chaplain with the Metropolitan Transportation Authority.

Asked for his first impression of the community, Colamaria said that he received “the warmest welcome of any parish I’ve ever been to. I’ve felt like part of the people.”

Colamaria later marveled at a “strong willed” Howard Beach that “built back from [Superstorm Sandy] quite quickly.”

Colamaria indicated that, among other initiatives, he intends to start a youth group at the 83rd Street church, and bring back an annual feast for community.

Additionally, focusing on the spiritual needs of young adults with children in the neighborhood will be a priority, he said.

“We’ve got a good, strong school,” Colamaria noted. “I see a bright future for the parish, long term.”