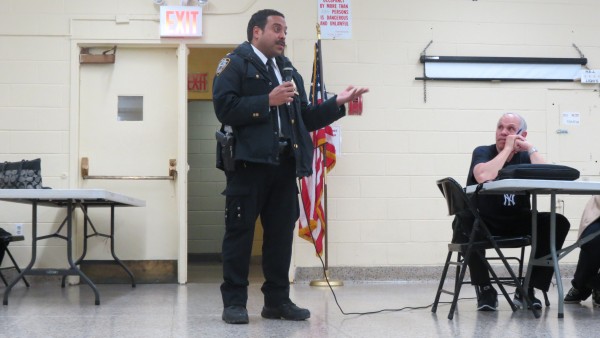 When he was 7 years old, bouncing around the borough of Brooklyn, Jeffrey Schiff and his brother, Lawrence, giddily ripped off the wrapping paper that was covering what seemed, just a few seconds prior, to be identical presents from their mother.

They were career kits: all-in-one professional packs featuring faux uniforms, gear, and tools of the role-model trades—astronaut, firefighter, etc.—the jobs that kids looked up to wide-eyed, as if they were fantasies born of the imagination of Walt Disney.

Jeffrey opened his to reveal a police officer’s cap and badge; Lawrence, a stethoscope and lab coat.

“It’s just funny how it works out,” noted Schiff—the cop—with a grin, between sips of Starbucks. “It’s always been on my mind. Always.”

That penchant for public service has stayed with Schiff, from his stint as a 6th-grade hallway monitor, silver badge and all, to his own command in south Queens—and a gold shield.

“It’s an honor to wear it, and I’ll always treat it as such,” Schiff said.

He then leaned back in chair, eyes slowly wandering upward as he began to recall one of the moments in his early life that inspired him to patrol the streets of his hometown. Schiff’s uncle, a lieutenant in the 110th Precinct, brought a 12- or 13-year-old Schiff down to the stationhouse on 43rd Avenue for Family Day. On a tour of the building, Schiff found himself in one of the holding pens.

“I didn’t like the cells,” the history buff related as a wry smile began to emerge. “I said, ‘I don’t belong on this side of the bars.’ I always remember that.”

The 48-year-old married father comes from a long line of public servants, particularly in the Armed Forces. His dad was an Army veteran of the Vietnam War, and two aunts earned their stripes in the Air Force. Both his uncle and aunt retired from the NYPD.

After earning a bachelor of science degree in electrical engineering from what is now New York University Polytechnic School of Engineering, Schiff held down a series of tech jobs at such companies as Grumman and Catholic Charities.

In 1991, Schiff began to take myriad civil service exams, including police officer. And at 9:30 p.m. on July 17, 1996, he received the phone call that would change his life: Report to Queens College tomorrow morning to be sworn in as a New York City cop. 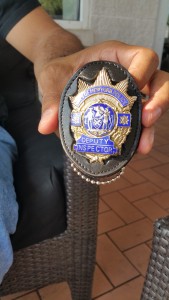 Out of 1,492 rookies in his academy class, Schiff scored in the top three academically. One of the rewards for such an achievement was the pick of his first precinct.

Schiff started out in the 103rd in Jamaica, a dense, high-crime command in the southeast corner of Queens. In 2001, he suffered a debilitating, career-threatening injury responding to a radio call of a 1013—officer in distress. Schiff severely dislocated his right shoulder trying to cuff a man who didn’t want to be cuffed.

Leaning forward now, drawing down the collar of his black T-shirt to reveal a 3-inch scar near where the shoulder meets the chest, Schiff said he could have retired early from the wound that to this point precludes him from certain day-to-day tasks.

The injury left Schiff on the shelf for about a year. But in the 13 years that have followed, he has earned four promotions.

In September 2013, he was assigned to the 106. Following a bumpy start, replete with a spate of nasty home invasions in Howard Beach and the premature birth of his son, Tristan Tiberius, Schiff seems to have found his footing over the past year. He credits this to the officers under his command and the communities that comprise the precinct.

“I try to make it all inclusive, and I think it’s worked extremely well,” Schiff said. “They see that I’m reaching out to them.”

It’s obvious, as he fields several calls and texts during our conversation, that even though he’s technically on vacation this week, Schiff remains plugged in to the precinct. And that’s why, Schiff posited, he has found success at every rank in the department.

That’s why, he said, that just like his son and his wife, retired NYPD Sgt. Dorian Schiff, who has fully recuperated after being gravely injured in a car accident on the job, Schiff has come roaring all the way back from the obstacle that threatened his journey.

“I just want to be able to affect change in my corner of the universe,” he said.