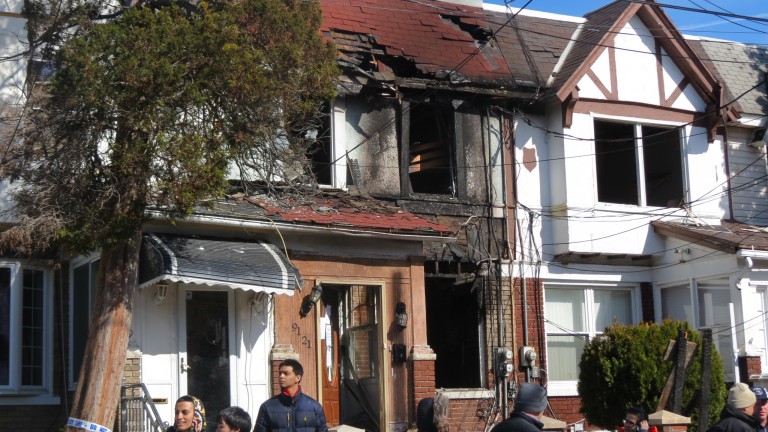 Photo: Cock lofts allowed a fire to spread to eight houses on this Woodhaven block in March. Forum Photo by Michael V. Cusenza

The ball is in the Assembly’s court as the Senate recently approved legislation that would provide incentives for the removal of cock lofts—small, often hazardous, enclosed spaces above the highest finished ceiling of a building that allow fires to spread to attached houses.

The bill, initially introduced by state Sen. Joe Addabbo, Jr. (D-Howard Beach) in 2013 in the wake of a raging five-alarm fire in Middle Village that damaged seven homes, injured 11 firefighters and may have been exacerbated by the existence of cock lofts in the structures. Since that blaze, cock lofts contributed to subsequent area fires, including December 2014, when a blaze badly damaged apartments in Ozone Park on 97th Street; and March 2015, when a deliberately set inferno burned out a row of Woodhaven houses on 90th Street.

Joe Hartigan, a retired city Fire Department lieutenant and Rockaway resident, said cock lofts make fires all the more destructive and difficult to get under control.

“It’s like an exposed 50- or 100-year-old lumber yard up there,” he noted. “There’s no sheetrock protecting anything.”

Under Addabbo’s proposal, residents whose homes contain cock lofts would be able to apply for a 30 percent tax credit to repair them. Refundable credits of up to $500 would aid eligible homeowners in affording the cost of making the improvements and eliminating the fire hazards.

“Clearly, if we can do something to address the serious dangers that cock lofts now pose to our residents and emergency personnel, we should do it,” Addabbo said. “This legislation seeks to lend a hand to homeowners who might otherwise be unable to afford the improvements. In turn, we will be able to provide safer neighborhoods for all of us, and very possibly save lives and prevent unspeakable tragedies.”

Addabbo noted that connected row houses are no longer designed and built with cock lofts, owing to their dangerous ability to allow flames to move quickly from building to building.

“So now it’s time to take aim at the cock lofts that still exist and should be closed off,” he said.