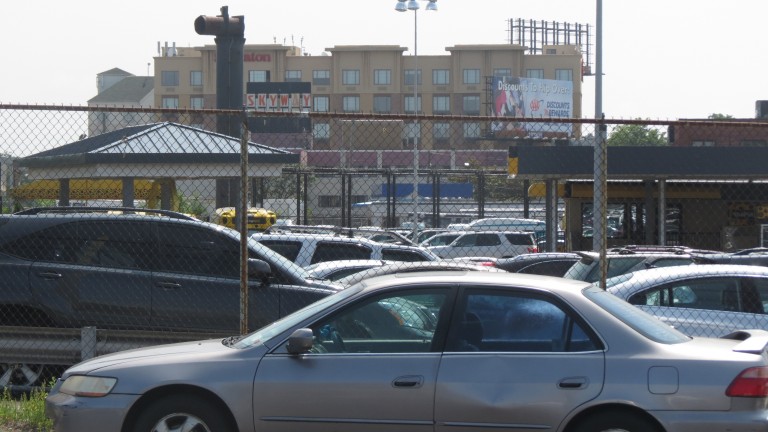 Photo: Residents of the upper floors of Skyway Shelter, including 52 sex offenders, have an unobstructed view of the PS 124 playground. This image was shot from the playground. Forum Photo by Michael V. Cusenza

City Councilman Ruben Wills (D-Jamaica) on Tuesday proudly announced a victory for South Ozone Park: the city Department of Homeless Services has acknowledged that the Skyway Shelter on South Conduit Avenue, which houses 52 registered Level 2 and Level 3 sex offenders, is not compliant with state residency restrictions.

State law prohibits certain sex-offenders from knowingly entering into or upon any school grounds. Wills’ office recently conducted a survey of the real property boundary line of PS 124, located about a block away at the corner of 130th Street and South Conduit Avenue; it revealed the actual distance between the school and the shelter is less than 930 feet, falling short of a state-mandated 1,000-foot boundary.

Residents on the upper floors of the shelter have an unobstructed view of the school building and yard.

“The city is legally and morally obligated to provide shelter to anyone who requests it,” a DHS spokesperson said in a statement to The Forum. “The city ensures those listed on the sex offender registry are sheltered at sites that meet New York State Department of Corrections and Community Supervision guidelines. Originally, DOCCS approved this site as meeting the requirement to be 1,000 feet from a school, but on Monday they notified us that this facility no longer meets this geographic requirement. We are working to transfer those residents to sites that are compliant.”

Since its 2011 conversion to a single men’s shelter from a family facility, DHS has been placing registered Level 2 and 3 sex offenders at Skyway.

“There’s no way you can say this is appropriate,” Wills said. “This [acknowledgement] allows the community to breathe a sigh of relief.”

Wills also noted that now that DHS “is in recognition of the fact that this shelter is not, and has never been, compliant” with the laws on the books, the agency needs to remedy the situation as quickly as possible.

“The department must expedite the removal of all sex offenders who currently reside there, and I urge it to also reassess the viability of the process by which it rapidly converts similar facilities to permanent shelters, from which this nightmarish ordeal derived,” he said.

Community Board 10 District Manager Karyn Petersen said that the board “joins Council Member Wills in seeking to have the sex offenders living in the Skyway Shelter removed by DHS.”