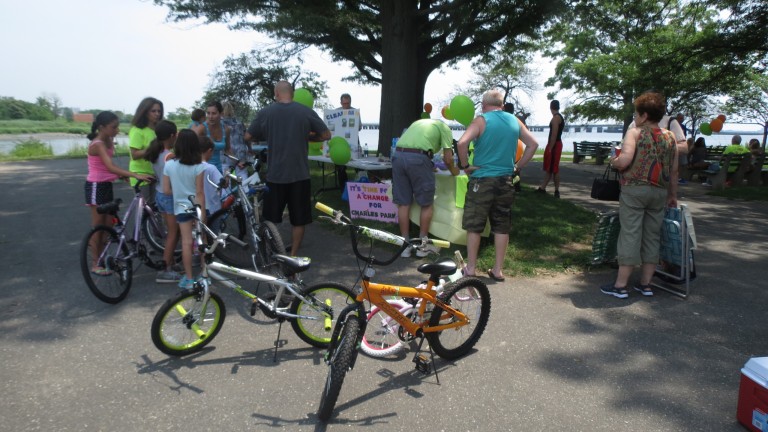 PHOTO:  Fans of Frank M. Charles Memorial Park on Sunday signed a petition addressed to the National Park Service and the Department of the Interior requesting a major clean-up of the Howard Beach green space.    Forum Photo by Michael V. Cusenza

Concerned Howard Beach residents, led by “Two Girls on a Mission,” set up shop last Sunday in Frank M. Charles Memorial Park to collect signatures for a petition to clean up the federally owned green space.Sisters Sheri Volkes and Debra McCann, frustrated with the conditions of the park, organized the petition through the website change.org, and plan to send it to the National Park Service and the Department of the Interior.As of press time, they had compiled 262 signatures.

“[The park] is disgusting,” said Volkes, who moved to Howard Beach two years ago. “But I love this area.”

Volkes and McCann decried the current state of Charles Park, documenting in pictures the garbage and debris left by night revelers, graffiti, handball and basketball courts in disrepair, and the stacks of tree branches piled high in some spots.

Volkes said it’s not people from the neighborhood who are destroying the beloved 165th Avenue green space.

“We’re going to have outsiders here leave a mess? And why should we be responsible for cleaning it up?” she said.

On Sunday, Volkes, McCann and other fans of the park offered everything from tiny, individually wrapped gifts to free bottles of water to anyone that signed the petition.

Annamaria Guerriero, a 96th Street resident who donated her face-painting service at the petition drive, said that recent events have definitely contributed to the deterioration of the park.

“Since [Superstorm] Sandy, everything has been downhill,” she noted, pointing at discarded tree limbs behind her stand. “We feel that the park doesn’t represent us as a neighborhood.”

Asked about the petition, Daphne Yun, a spokeswoman for the National Park Service, said in a statement, “Gateway has worked hard over the years to keep Frank Charles Park, as well as the rest of our park, clean and attractive for our visitors. We have had several projects with different groups this past spring and summer to help maintain Frank Charles Park for the public. In April, Gateway collaborated with X Bay Softball and Assemblyman [Phil] Goldfeder (D-Howard Beach) to get the ball fields and bocce ball court ready for summer. We’ve recently hosted clean-ups with both Boy Scout Troop 139 and the Charles Park Conservation Society and planted a milkweed garden for pollinators. In addition, we provide daily maintenance and clean-up for this site.”

“We need more Park Police and/or Park Rangers to patrol the park during the week, and full-time patrols on the weekends,” they wrote on the petition’s homepage. “We need to stop the night-time activity, including night-time fishing and the rituals that are very bothersome to the residents who hear the beating drums and stench from these rituals. Those who are performing these rituals are sacrificing chickens that are left behind on the beach as well as many fruits and food.”

View the petition at change.org/p/u-s-national-park-services-u-s-department-of-interior-clean-up-frank-m-charles-memorial-park-howard-beach-n-y-11414?just_created=true.

Yun encouraged any groups that would like to work with NPS to keep the park clean to contact Volunteer Coordinator Keith White: Keith_White@nps.gov.