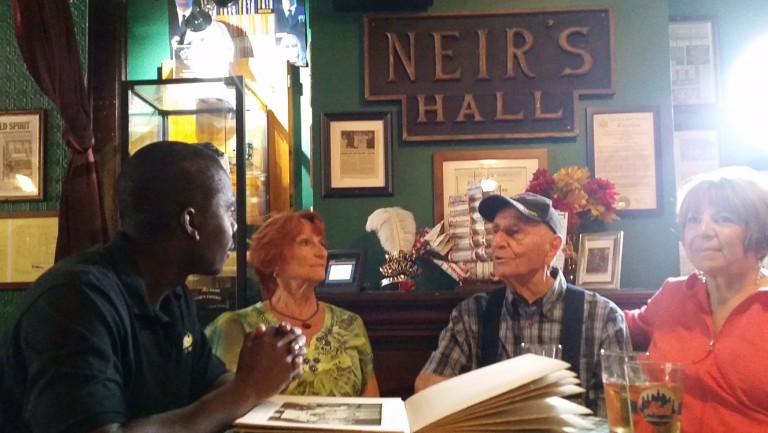 The momentous occasion allowed Burlingame, 91, to relive one of the most joyous days in his life: April 27, 1946, the day the Army Air Corpsman married his sweetheart, Peggy, and celebrated with friends and family at the historic Woodhaven bar.

“Mrs. Neir gave us the upstairs hall for our wedding reception… Ham and cheese sandwiches, barrel of beer, coffee, the cake real simple in those days; music was the radio or record player, my sister-in-law played the piano in the hall,” Burlingame wrote last summer in a letter to Neir’s co-owner Loy Gordon.

Burlingame saw a television show in which the tavern was featured.

“It brought back a lot of memories,” he said, adding that his father used to go to Neir’s “to watch the ball games in the 1930s.”

Burlingame enjoyed lunch on Saturday with daughters Ellen, Lois, and Arlene. His beloved Peggy passed away in 2013. They were married 67 years.

“Bill’s story is a reminder of the importance of preserving Queens’ historic places, like Neir’s, by making it a landmark,” Gordon said. “This letter will be on our walls as long as Neir’s Tavern is open. It will help us to remember a courageous World War II veteran’s family history with one of America’s oldest bars and restaurants.”