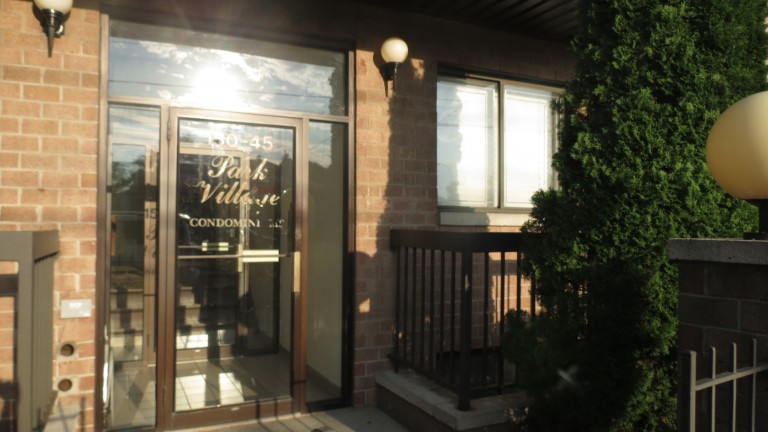 PHOTO: NYPD cops last week executed a search warrant at a 2nd Floor condominium inside Park Village on Centreville Street in Ozone Park. Two men were arrested as part of a credit card and gift card fraud scheme that police believe was run out of the residence. Forum Photo by Michael V. Cusenza

Part I of a Series

Police last week executed an early-morning raid and search warrant at a building in Ozone Park, arresting two men and effectively smashing an identity theft scheme based on credit card and gift card fraud, according to the NYPD and sources.

Jacques Joseph and Kaeshawn Kerr were rousted around 6:35 a.m. last Wednesday inside a second-floor residence in the Park Village Condominiums on Centreville Street.

According to state penal law, a person is guilty of criminal possession of a forged instrument when, with knowledge that it is forged and with intent to defraud, deceive or injure another, he utters or possesses any forged instrument, including a deed, will, codicil, contract, assignment, commercial instrument, credit card, or a physician’s prescription.

Criminal possession of a forgery device involves the possession of any plate, die or other device, apparatus, equipment, or article specifically designed for use in counterfeiting or otherwise forging written instruments.

Last week’s arrests were the result of an investigation conducted by the NYPD’s Financial Crimes Unit. According to Deputy Inspector Jeff Schiff, commanding officer of the 106th Precinct, “A few people suspected some drug activity from the location and reported it to us. We then conferred with our Narco and Financial Crimes Division to address it.”

According to documents obtained by The Forum, the condo in which Joseph and Kerr were cuffed was leased last October to Shantelle Walker, 32, believed to be Joseph’s girlfriend, who is currently cooling her heels in Nassau County jail on fraud charges.

In March 2014, Walker and Joseph were caught with 60 stolen credit cards after attempting to use one at a Garden City Ruth’s Chris Steakhouse. In May 2013, Joseph and another woman were caught traveling back home to New York from Charlotte, N.C.,  after allegedly ripping off stores down south by buying real gift cards with phony credit cards.

Walker is scheduled to be released on Sept. 29. Her Park Village lease expires at midnight on Sept. 30.