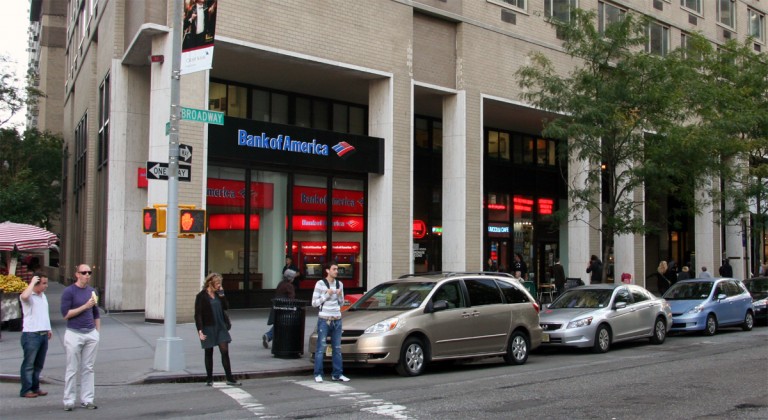 PHOTO:  According to federal authorities, Leonid Kaziyev robbed this Bank of America branch on Broadway and 63rd Avenue in Manhattan.  Photo Courtesy of scoutingny.com

A joint task force last week in Queens apprehended a man believed to be behind the armed robberies of three Manhattan banks over the last six months, according to the U.S. Attorney’s Office of the Southern District of New York.

Leonid Kaziyev was picked up last Monday night by agents and detectives of the FBI-NYPD Joint Violent Crimes Task Force. Due to the ongoing investigation and prosecution, federal authorities could not release the specific Queens community in which the arrest took place, an FBI spokesperson told The Forum.

According to the complaint, on two different occasions, on Dec. 9, 2014 and June 5, 2015, Kaziyev allegedly robbed the same branch of HSBC bank, located on 5th Avenue and East 21st Street, while displaying a gun; and robbed a branch of Bank of America, on Broadway and West 63rd Street in Manhattan, with a firearm, on May 21 of this year.

During each of these robberies, Kaziyev wore sunglasses and various headwear. He allegedly demanded money from the bank teller working at the window with written notes that read “Money Now,” and with verbal commands—including “Give me the money. I want the second drawer and the third drawer – all the twenties that are there”; and “Give me the hundreds and twenties from the bottom drawer. Don’t press the [silent alarm] button”—after pulling a black gun from a shopping bag.

Authorities said that Kaziyev allegedly escaped with over $10,000 cash each time. He was captured on surveillance video footage during each of the three incidents, and a vehicle registered to Kaziyev was captured on Automatic License Plate Reader data, arriving to, and leaving, the scenes of the robberies.

Additionally, according to the complaint, a handwriting expert has indicated that the same individual wrote the demand notes; and DNA evidence from a cigarette butt found at the Bank of America robbery scene matches Kaziyev’s profile.

“In this day and age of electronic banking, old-fashioned, stickup bank robberies still happen,” said U.S. Attorney Preet Bharara. “As alleged in the complaint, Leonid Kaziyev went on an armed bank robbery spree over the last several months, targeting two banks in Manhattan on three different occasions, putting innocent people at risk. Thanks to the work of the FBI-NYPD Joint Violent Crimes Task Force, Kaziyev is now in custody.”

Police Commissioner Bill Bratton added, “There is no better example of collaboration: NYPD detectives and FBI agents working together to address a crime problem. Diligent investigative work has led to the arrest of Mr. Kaziyev for holding up banks across Manhattan, as alleged. I want to thank the agents, detectives and prosecutors who have been working to make this possible.”