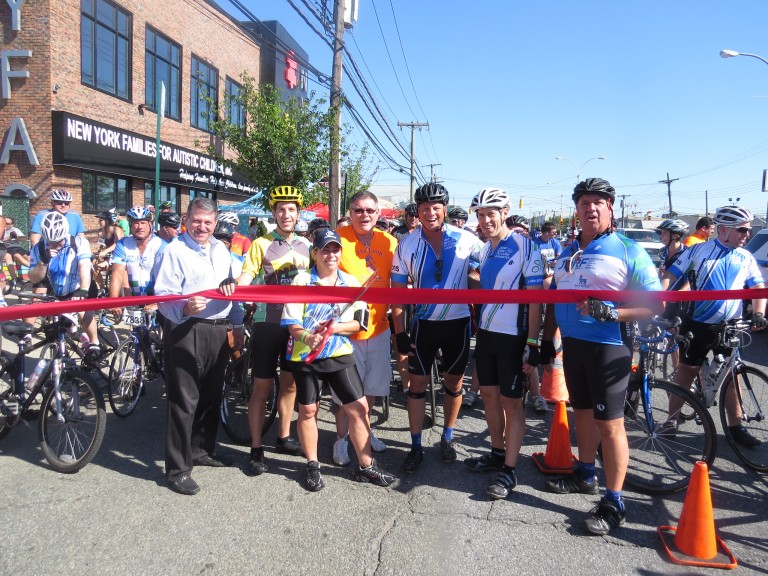 PHOTO:  Cyclists and civic leaders are ready to roll as the ribbon is cut signaling the start of the 2nd Annual Loop last Sunday morning in Howard Beach.  Forum Photo by Patricia Adams

Area cycling enthusiasts on Sunday suited up and pushed their pedals to pump funds into JDRF diabetes research and New York Families for Autistic Children at the 2nd annual Loop in Howard Beach.

More than 100 riders strapped on helmets for the 20-mile trek from the NYFAC Autism Center on Cross Bay Boulevard over three bridges in Queens and Brooklyn and back to NYFAC, where dozens of volunteers and supporters cheered cyclists and enjoyed barbecued fare and a live DJ.

“You get to see all the communities of south Queens and raise money for some amazing charities,” Assemblyman Phil Goldfeder (D-Howard Beach) said of his inaugural Loop experience. “It’s a great activity, and the community can all come together to do something fun, exciting and challenging.”

Retired city Firefighter Matt Long finished first, clocking in around 56 minutes. The Rockaway Beach resident has come roaring back from death’s door in the winter of 2005, when he was struck by a city bus and critically injured on the streets of Manhattan while riding his bike to work. He received 68 units of blood in the first 40 hours following the accident and spent five months in the hospital. Long endured 40 surgeries in less than two years.

“It’s a fun thing for a good cause,” said Long, adding that he dedicated Sunday’s ride to his good friend Trey Delgrasso.

Long, 49, has bounced back from his accident to become a competitive cyclist. He said he hopes to sign up for more charity events like the Loop when he’s done racing.

“I like to give back,” he related. “It gives you something to look forward to.”

Pablo Marquez, a type-II diabetic from Far Rockaway, crossed the finish line with the third best time (62 minutes). He characterized the Loop as a “beautiful, safe route,” adding that he got into distance cycling after he was diagnosed last year. 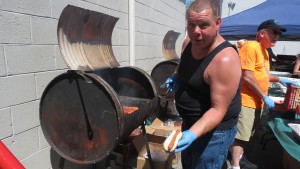 Derek Rapp, president and chief executive officer of JDRF International, said his first Loop “was a beautiful ride, beautiful day—but the best is, of course, the people,” and later added, “you’re doing something that’s both good for the community and good for you personally.”

“One – the community came together, got some exercise on a beautiful, sunny day; and two – we helped kids who have to live every day with diabetes or autism,” he said. “Great day for two great causes.”

The Loop would not be a success without the help of volunteers. Thank you! Forum Photo by Patricia Adams