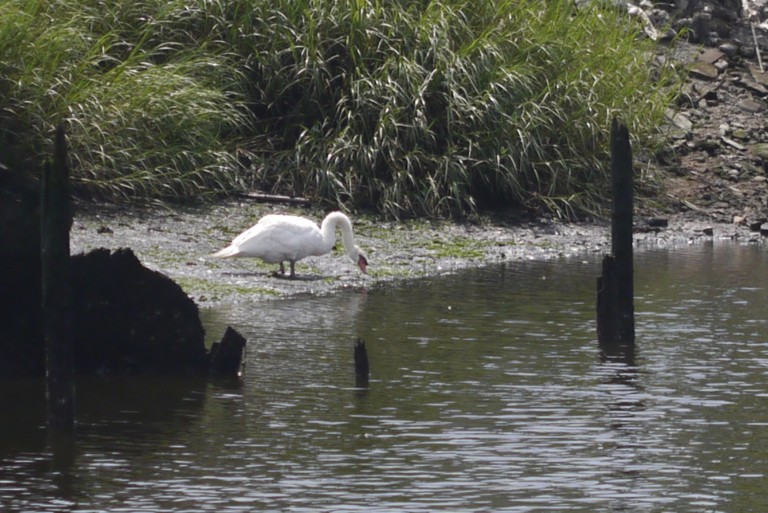 PHOTO: A lone swan, thought to be one of a domestic pair living alone in Howard Beach, checks for food along Hawtree Creek.  Mute swans usually mate for life, sometimes in same-gender couplings.  Forum Photo by Greg Zwiers

Mute swans have been in this country for over 100 years, brought over in the late 19th century from Europe for their aesthetic value, but they are classified by the State as non-native and invasive — often displacing other native species with their aggressive nesting-season behavior.

In New York, the estimated population of the mute swan is currently about 2,200. In 2014, the Department of Environmental Conservation released a draft proposal to completely eradicate the creature here – resulting in a backlash from both animal welfare leagues and the general public. The revised plan, released earlier this year and available at www.dec.gov/animals, focuses on the impacts of mute swans rather than the “specific methods that may be used to minimize those impacts.” Non-lethal control of swans (such as egg addling: the removal of eggs from nests) is promoted whenever “practical and timely,” due to public opinion on killing the birds.

Sexually adult at two years old, mute swans produce an average of six eggs per nesting period, and about half of all cygnets (baby swans) survive. The DEC plan states that “in the absence of management, wild mute swan populations will expand throughout New York State and could reach numbers in excess of 5,000 birds within 20 years.”

Dan Mundy, President of Jamaica Bay Ecowatchers, said he would have understood the original DEC proposal had it been merely to control the population, rather than completely eradicate the majestic birds.

“Everyone loves the swans,” he said.

Mute swans are named such because they are less vocal than other species, though they do grunt and hiss when provoked or when defending their nests. In addition to territorial behavior toward native water fowl and humans alike during the spring nesting season, the mute swan’s impact on aquatic vegetation can often be devastating. Compared to other species, the birds are huge – the largest in New York. They weigh 20-25 pounds and have wing spans of up to seven feet – and can consume up to eight pounds of vegetation daily. Often, they uproot more plants than they eat. Their nests are also large, at up to five feet in diameter.

In the spring of 2014, a mute swan couple was observed in the marshy nook by the Howard Beach/JFK train station. They were building a nest. During subsequent observations the nest remained visible, as did the lone couple of swans nearby protecting it. If “Cribs” had a fowl version, these swans would surely have showcased theirs, as they seemed to have complete domain over the ‘hood. The only other bird in the vicinity (on more than one sighting) was a sleek white heron – always present in their midst, harmoniously integrated into the family like an adopted stepchild or the friend borrowing the couch who never leaves.

Mute swans tend to mate for life, and both parents raise their young. Pairs are often formed with swans of the same gender. The sex of the JFK train swans is unknown; cobs (male swans) and pens (female) are difficult to discern even by experts. The point of observation was too far away to determine whether or not the nest contained any eggs, and no cygnets were ever observed thereafter.

Don Riepe, Director of the Northeast Chapter of the American Littoral Society, said there was a population of 100 swans in East Pond until the bay froze last winter and they had to leave. While the birds don’t generally migrate great distances, they might move around in summertime, he explained.

Mute swans, their eggs, and nests are protected by the State’s Environmental Conservation Law and may not be touched without DEC authorization.

In the 14 months that have passed since the initial sightings of the swan couple at the station, a single swan now floats down Hawtree Creek seeking handouts from neighbors. The “family” heron is still nearby, a sort of guardian.