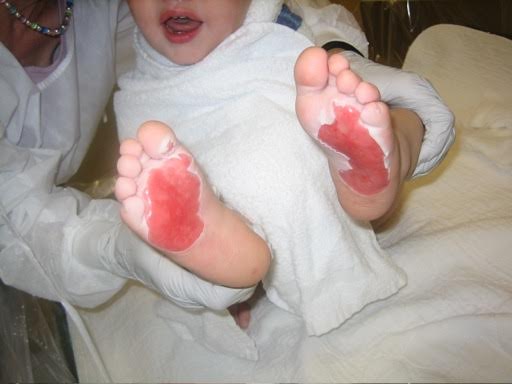 PHOTO:  This 18-month-old baby suffered burns to his feet while playing on playground safety surfacing at a Manhattan park. Photo Courtesy of NYC Park Advocates

Park users are advised to avoid playing on artificial turf fields and frequenting unshaded playgrounds with exposed skin during heat waves, according to NYC Park Advocates.

Exposure to unshaded artificial turf can lead to blisters, dehydration, nausea, and heat stroke, which can be fatal.

Young children are particularly susceptible, as it takes mere seconds for skin to sizzle on solid surfaces with temperature readings greater than 140 degrees, according to doctors.

Each year more than a dozen children are treated in the city’s three burn centers for injuries suffered on playground safety surfacing, Croft noted before adding these tips on how to stay safe as the summer winds down: Avoid playgrounds with black safety surfacing, unless they have complete shade coverage; avoid metal surfaces like slides; avoid artificial turf fields in the sun; drink lots of liquids; use spray showers, pools and water features; seek shade frequently; participate in non-strenuous activities; in case of emergencies, seek immediate medical treatment or call 911.

The Parks Department provides more than 800 athletic fields around the city. Of these fields, 136 are composed of synthetic turf material. In addition to the athletic fields, there are 19 play areas in the city system that are small spaces, often within playgrounds, and are covered with synthetic turf surfaces.