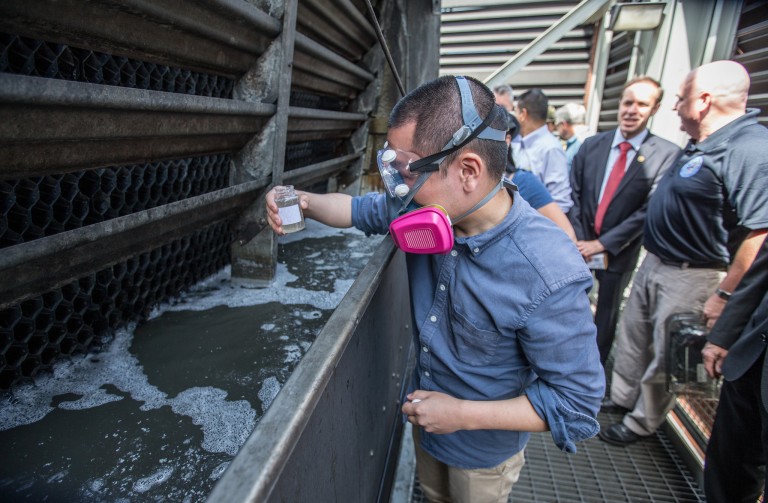 PHOTO:  State health team on Monday collected water samples from a cooling tower on the roof of Montefiore Medical Center in the Bronx.  Photo Courtesy of Gov. Cuomo’s Office

Gov. Andrew Cuomo on Monday announced that the state’s multi-agency deployment is continuing to test for Legionella and canvass additional locations in the Bronx.

Efforts over the past two days resulted in more than 500 building sites being canvassed, Cuomo noted. The State Mobile Command Center is open at Hostos Community College to lead the effort, and expanded outreach and testing efforts are taking place throughout the borough.

This effort is continuing to be done in close coordination with the work of the Centers for Disease Control and Prevention and the city Department of Health and Mental Hygiene.

According to the administration, the legislation is the first in the nation to provide for detailed requirements and oversight, including mandatory registration, testing and inspections of cooling towers, and sanctions for failure to comply with new standards.

Its provisions are designed to ensure adherence to industry standards for maintenance, cleaning and testing for microbes, and reporting of samples that present a serious health threat to the Department of Health and Mental Hygiene.

“We are confident the Legionnaires’ outbreak in the South Bronx has been contained, and are working with our partners in the City Council to protect the entire city in the long-term through stringent new regulations for building owners,” de Blasio said. “New York is the first major city in the nation to propose new registration, inspection, and enforcement standards for the cooling towers which harbor Legionnaires’ bacteria. This action reflects our chief priority: to safeguard the health of New Yorkers.”

“This strong proposal will greatly help reduce the risk of another mass outbreak of Legionnaires’ disease in New York City,” said Buildings Commissioner Rick Chandler. “The department launched an online cooling tower registration portal over this weekend and we are encouraging all property owners and managers to register their unit.”

In advance of the legislation, the city has developed a registration database for buildings with cooling towers and evaporative condensers in order to make sure they are properly maintained and cleaned. Voluntary registration can be done online at nyc.gov/buildings. DOB will provide assistance to property owners during the voluntary registration sign-up period.

The symptomology of legionnaire’s disease can mirror that of pneumonia and includes fever, shaking, chills, cramping and muscle ache, back pain, coughing and headaches. More severe symptoms include fatigue, confusion, diarrhea and the loss of appetite.

Individuals with this symptom profile who smoke or have any respiratory disease are urged to see their physician at once or go directly to the hospital.

Despite the fact that disease can be fatal, treatment with antibiotics in cases diagnosed and treated at early onset is highly successful in arresting the disease.

Patricia Adams contributed to this story