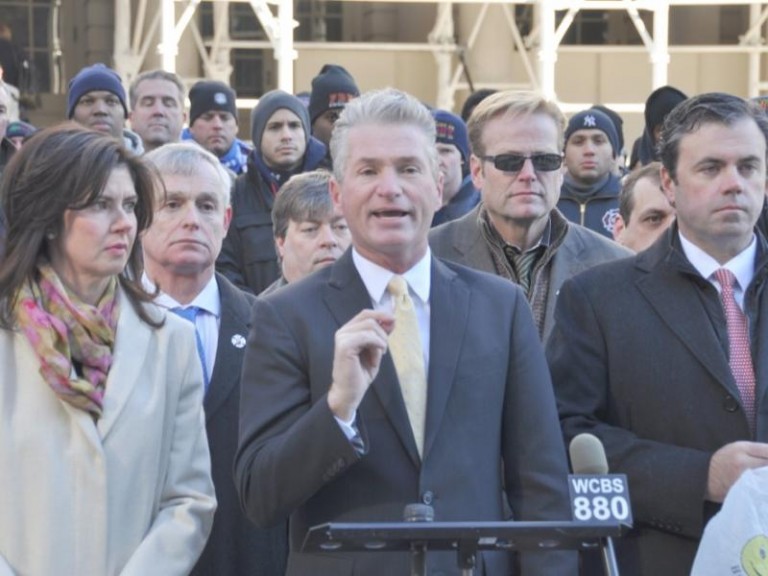 The de Blasio administration and the Uniformed Firefighters Association last Friday announced that they have arrived at a tentative contract agreement.

UFA Local 94, which has been working without a pact since its last one expired in 2010, represents over 8,000 firefighters and other FDNY personnel across the five boroughs.

In addition to the labor agreement, the city and the union are jointly supporting new disability pension legislation that will ensure uniformed workers receive the coverage they need in the event of disability; and they’ve also agreed to settle longstanding litigation that dates back to the prior administration, related to the 2011 expiration of the Roster Staffing Agreement.

The proposed contract provides for 11 percent in raises over seven years. For most UFA employees, the contract would begin, retroactively, on Aug. 1, 2010 and expire on July 31, 2017.

For the small collective bargaining unit representing pilots and marine engineers, the contract would begin, retroactively, on Aug. 8, 2011 and expire on July 27, 2018.

The net cost of the agreement is projected to be approximately $560 million.

In total, the Municipal Labor Committee and the city have agreed to secure $3.4 billion in healthcare savings through Fiscal Year 2018 (starting with $400 million in FY 2015 and building up to $1.3 million in FY 2018), and $1.3 billion in recurring savings every year thereafter. These savings are focused on cost-cutting measures that, for the first time, according to the Mayor’s Office, will bend the curve of rising healthcare costs. The city said it has met its target of $400 million in savings for FY15 and is on track to meet the FY16 target of $700 million. These savings are guaranteed and enforceable by arbitration.

“Today the UFA settled our expired contract, resolved a longstanding engine company staffing fight and reached an agreement that will restore real disability benefits for all firefighters hired after July 1, 2009,” said UFA President Steve Cassidy. “The UFA has always believed that every firefighter should never worry about who will take care of their family if they are seriously injured in the performance of duty. This agreement settles three important issues for our membership at once.”

The key provisions of the disability pension legislation include: employees who receive Accidental Disability Retirement will receive 75 percent of their pay benefit; existing presumptions under Tier 2 will be restored; the less expensive Tier 2 Cost of Living Adjustment will be restored; the final average salary will be based on five years, and no single year can exceed the prior four years by more than 10 percent; the social security offset will be eliminated; members will contribute an additional 3 percent of their salary to offset the city’s cost.

And under last week’s tentative agreement, the FDNY will staff 20 engine companies with five firefighters each by February 2019, adding the fifth firefighter to five companies each year beginning in 2016.