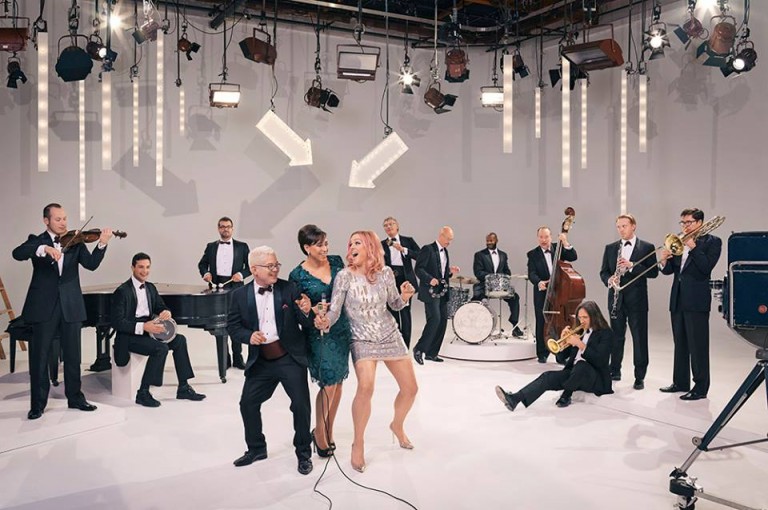 When Portland-based pianist Thomas Lauderdale founded Pink Martini in 1994, he called it a “little orchestra,” as the band’s multilingual and multi-musical-styled sound is possibly otherwise undefinable. It is apt that the 12-musician band played last week with the New York Pops, the largest orchestra of its kind in the United States. Steven Reineke conducted his Pops to form-fit Pink Martini’s broad style(s). The matchup was spectacular and the Forest Hills Stadium setting (the Pops’ new summer home) ideal for the sound.

In creating Pink Martini, Lauderdale wanted specifically to perform “soundtracks for political fundraisers” on behalf of causes such as the environment and education. Mission aside, what he made was masterful, evident not only in the pop-loungy-Latin-ballad mix of songs performed Friday night, but also in the age range of the audience. Kids who lined up for the free “Kids in the Balcony” tickets sponsored by the Pops, and die-hard orchestra aficionados in the 70+ range, and Pink Martini 30- and 40-something fans, all enjoyed the diverse music. Some joined a conga line, and one couple celebrating their anniversary even performed a swing. 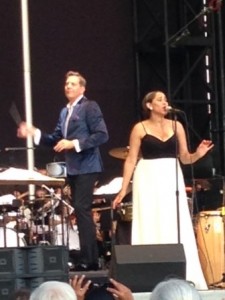 China Forbes, who joined the band a year after its founding and writes a lot of its songs, stole the show with her elegant style and a wide vocal range. Forbes has a way of pronouncing her cantations (in every language she sings in) in such a manner as to harken to spoken word performance. She is a magnificent singer. Storm Large, with her even bigger stage persona, is another powerhouse in the group. She became the guest vocalist during Forbes’ leave of absence in 2011 and continues to tour and perform with the band. A third guest showwoman, the cabaret-and-cute Liza Minelli-esque Meow Meow, wearing a single glove and a lot of sequins, also performed a few songs using a couple of guys she picked out of the audience as stage props. Pansy Chang, (possibly the best-named cellist in existence) was also a standout of the night.

Here’s hoping that Friday’s performance wasn’t just a star-aligned one-time event and that Pink Martini and the New York Pops will collaborate again in the very near future. In the meantime, we’re going to buy more Pink Martini downloads on iTunes.