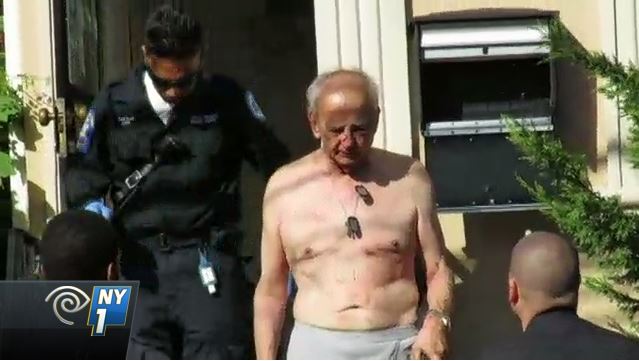 Two city Sanitation workers last Saturday came to the aid of an elderly Ozone Park man who had been tied up and beaten as part of a home invasion robbery, according to police and published reports.DSNY partners Michael Burmudez and Joe Felicetti told Time Warner Cable News New York 1 that the man, Tony Puzio, ran in front of their collection truck with his hands bound and nose bleeding, screaming for help.

According to investigators, Puzio was tied up, pistol whipped, and robbed by a three-person team a little after 6 a.m. Puzio, who lives on 101st Street near 97th Avenue, was left by the brazen crew in his 2nd-floor bedroom with his hands and feet tied. The military veteran was able to get out of the leg restraints, and that’s when he ran outside toward the workers, who then alerted authorities.

“Once again our dedicated Sanitation workers have proven that they can be additional eyes and ears in our communities as they go about their job of keeping our neighborhoods clean and safe,” said Sanitation Commissioner Kathryn Garcia. “I’m proud that these two Sanitation workers saw a situation, took necessary action to safeguard and comfort the victim, called police, waited until the police took over, and then completed their route. This case will be submitted to the DSNY’s Merit Awards Board for consideration of possible medals of honor.”

Puzio was treated Saturday at Jamaica Hospital Medical Center for cuts and bruises and released the same day.