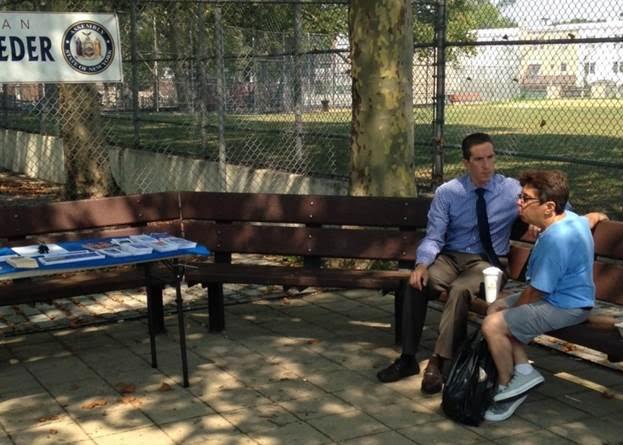 In a letter to Queens Borough Parks Commissioner Dottie Lewandowski, Goldfeder urged the agency to consider installing facilities at the playground because they would provide added convenience to parents with young children as well as seniors that frequent the popular neighborhood park. The move would also help curb reported instances of public urination in the area, Goldfeder added.

“The number one concern I received from families during my mobile office in Ozone Park was the lack of bathrooms at Centreville Playground,” Goldfeder noted. “This situation has encouraged public urination and prevented families from having the clean, accessible facilities they deserve. By making bathroom facilities available at Centreville, we can make for a better experience for everyone that comes to enjoy this great space.”

The assemblyman also wrote that he looked forward to discussing the matter with Parks officials at the end-of-season meeting planned for next month at Borough Hall. He added that he would be willing to work with the agency to find available state funds to help build the facilities.

“Centreville playground should have had bathrooms installed years ago. Putting in facilities would be a great benefit for the neighborhood and everyone that uses the park,” said Howie Kamph, president of the Ozone Park Civic Association.

A Parks spokeswoman said the department is looking “forward to discussing this project further with the assemblymember and the borough president at our upcoming meeting, and welcome the assemblymember’s support in identifying funding for the proposed construction.”

In 2002, the agency began a playground rehabilitation focused on the actively used areas of the park. Centreville received a $1.4 million facelift from the city that included new playground equipment, and resurfaced basketball and handball courts and benches, according to news reports at the time. Additionally, the toddler section of the park received colorful and durable play equipment and new safety surfacing.

Goldfeder noted that a bathroom facility would help complement the park’s amenities and add to the experience for area families.

“Centreville Playground is a true gem in the Ozone Park community. It’s only fair that the park have the bathroom facilities to match the fantastic amenities it has,” he added.