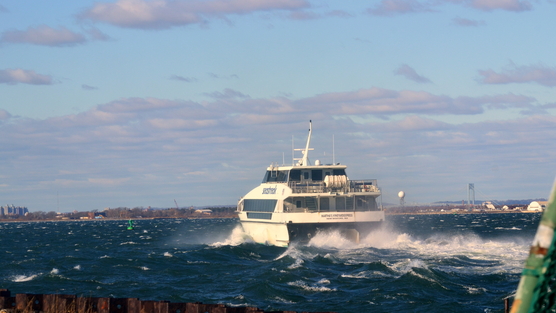 PHOTO:  Assemblyman Phil Goldfeder this week wrote a letter to the city EDC, calling on the corporation to expand proposed free shuttle bus service to eastern Rockaway and Broad Channel and consider the possibility of additional ferry docks in Far Rockaway.

An area elected official this week called on the city to expand proposed free shuttle bus service to eastern Rockaway and Broad Channel, and consider the possibility of additional ferry docks in Far Rockaway, but the administration has indicated that both ideas are not efficient.

Assemblyman Phil Goldfeder (D-Howard Beach) wrote a letter to NYC Economic Development Corporation President Maria Torres-Springer, urging the agency to increase shuttle service and look into the feasibility of adding docks in Rockaway to encourage the greatest possible ridership for the proposed Five-Borough Ferry service, which is set to launch in 2017.

Mayor Bill de Blasio dished the first details of the citywide system that “will knit together existing East River routes with new landings and services to Astoria, the Rockaways, South Brooklyn, Soundview and the Lower East Side” in his State of the City address in February.

De Blasio indicated that a ride on the Five-Borough Ferry will cost the same as a MetroCard fare. The transit option is set to launch in two years, and will be backed by city operating support and a $55 million capital commitment.

According to Goldfeder’s missive, Broad Channel and the eastern portion Rockaway are not included in current plans to implement shuttle service from Riis Park and Beach 67th Street to a dock at Beach 108th Street, which is being considered as a location. Broad Channel, an island community, falls within EDC’s own 20-minute radius limit for feasible shuttle service to connect to the 60-minute boat ride, Goldfeder noted.

“Broad Channel needs to be part of the Ferry Shuttle Program,” said Dan Mundy, Jr., president of the Broad Channel Civic Association. “Many of our residents will use the ferry to commute to Manhattan and with the large parking lot available, adjacent to the bridge, including a stop at this location will not only provide a convenient location for Broad Channel residents but also for our neighbors to the north who would also like to take advantage of this great transportation opportunity.”

Goldfeder also said that additional ferry docks would help increase ridership and create new transit options for communities faced with some of the longest commutes in the city, with many still recovering from Superstorm Sandy.

“Ferry service is an absolute necessity for every family in Rockaway,” Goldfeder stated. “We need to have the service in place that will reasonably serve the greatest possible ridership. By including Broad Channel and the east end of the peninsula, the city will help ensure that we have a strong service that benefits all of our families and is sustainable for years to come.”

However, according to a source with knowledge of the ferry service planning, additional docks and an expanded shuttle system would not work.

“There is an MTA bridge over which the A train travels that is in the way, so a ferry would not be able to get further east than [it is currently set to go],” the source said. “And regarding a shuttle, the further east a bus goes, the longer the shuttle ride, making the total commute time longer than a commute would be on the A train. It’s simply not efficient.”

NYCEDC told The Forum on Wednesday afternoon that the agency has not received the missive.

“As soon as we receive a letter from Assemblymember Goldfeder, we would be happy to review it,” said EDC spokesman Ian Fried.