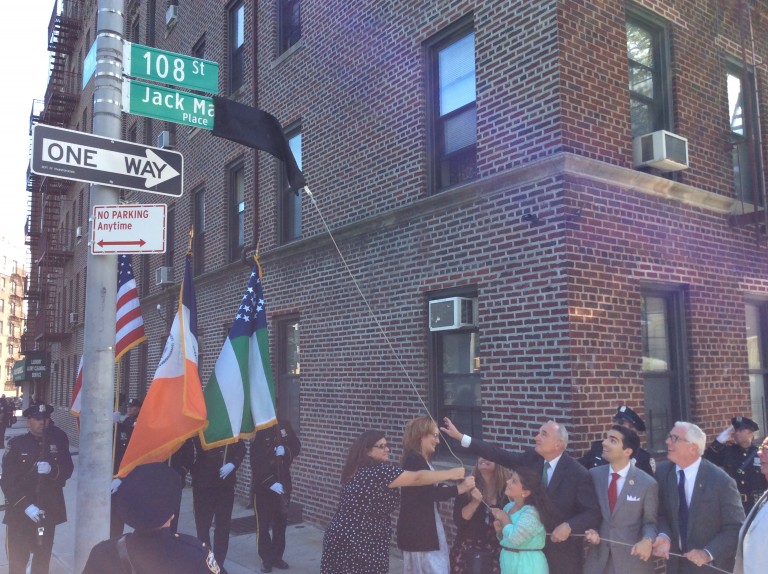 John Edward “Jack” Maple, a Richmond Hill native and one of the most impactful figures in the 170-year history of the NYPD, served under Police Commissioner Bill Bratton from 1994 to 1996 as the deputy commissioner for Crime Control Strategies. He is widely credited with creating and developing what is now known as CompStat, the crucial law-enforcement strategy tool the NYPD uses to track patterns and proactively fight crime.

Speaking on Monday morning before a large contingent that included the renowned NYPD Ceremonial Unit, civic leaders and former Mayor David Dinkins, Bratton called Maple “one of a kind,” and said the department still misses the man known for his daily uniform of homburg hats, bow ties, and two-toned shoes.

The son of a postal worker and a nurse, Maple attended Brooklyn Technical High School, but dropped out before his senior year to sign on as a trainee with the Transit Police. He would eventually get his General Educational Development diploma.

It was at Transit that Maple and Bratton crossed paths, when the latter was named chief of the force in 1990. And it was during their time together at Transit that Maple would show Bratton his colored push-pin-based crime mapping system—the rudimentary predecessor to the computer-generated CompStat of today.

“This street and every other street in New York City is safer because of him,” Bratton said. “His legacy as an innovative, effective crime-fighter is unmatched in American policing.”

City Councilman Eric Ulrich (R-Ozone Park) said that the Big Apple is the safest big city in America because of Maple’s work.

“This street dedication is just a small token of our appreciation for his contributions to the NYPD and the City of New York,” Ulrich added.

Ivan Mrakovcic, president of the Richmond Hill Historical Society characterized Maple as “a visionary and pioneer in modern police work. He is not alone: the great work of New York’s Finest remains an evolving process, but we pay homage to Jack Maple for igniting the spark we know as CompStat. We remain indebted to his good work.”