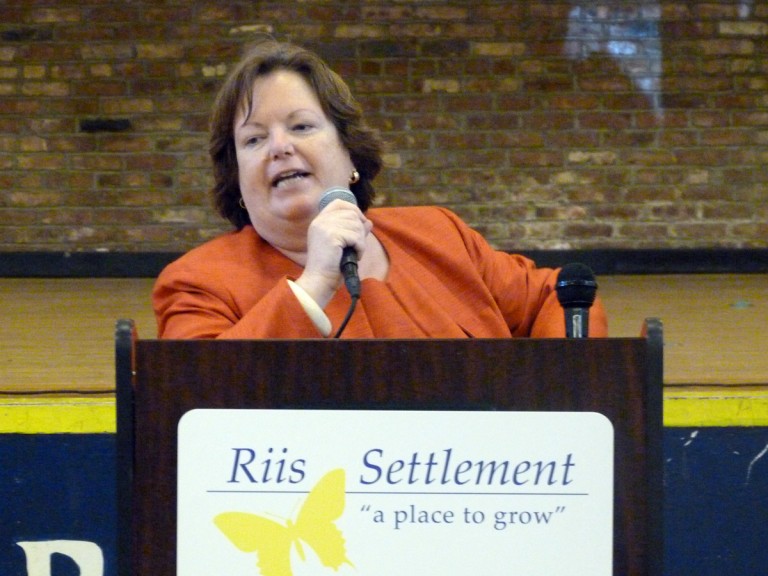 PHOTO:  Borough Assemblywoman Cathy Nolan has been appointed to the Common Core Task Force.  Photo Courtesy of the Jacob A. Riis Neighborhood Settlement

Gov. Andrew Cuomo this week launched the Common Core Task Force – a panel of education officials, teachers, parents, and state representatives from across New York that is charged with comprehensively reviewing and making recommendations to overhaul the current Common Core system and the way students are tested.

The task force is set to analyze learning standards, instructional guidance and curricula, and tests to improve implementation and reduce testing anxiety.

“The state’s learning standards must be strong, sensible and fair, and parents and teachers should be able to have faith in those standards,” Cuomo said. “This task force will ensure that this becomes the reality.”

Cuomo has charged the panel to review and reform the Common Core State Standards; review New the state’s curriculum guidance and resources; develop a process to ensure tests fit curricula and standards;

Examine the impact of the current moratorium on recording Common Core test scores on student records, and make a recommendation as to whether it should be extended; examine how the state and local districts can reduce both the quantity and duration of student tests, and develop a plan whereby districts include parents in reviewing local tests being administered to analyze those tests’ purpose and usefulness; and review the quality of the tests to ensure competence and professionalism from the private company creating and supplying the tests.

Among the representatives on the task force is Assemblywoman Cathy Nolan (D-Ridgewood), chairwoman of the Assembly Committee on Education. Cuomo indicated that Nolan was appointed, in part, because “she has spearheaded efforts to achieve class size reduction, universal pre-k, middle school initiatives, improve high school graduation rates, student data privacy protections and other measures that will ultimately mean success for the more than three million school children in New York State. As a parent of a public school student, Assemblywoman Nolan brings a parent’s perspective to the ongoing education dialogue.”

Calling public education “one of the most important roles that government performs,” Cuomo said he has spoken to stakeholders across the state, “and I know that the situation is critical – I have heard the message clearly: we must take action and we must take action now to fix our schools. And we will.”

Cuomo also recalled his father, former Gov. Mario Cuomo, who “used to say, ‘there are a lot of good ideas – the key is making them work.’”

“The implementation of Common Core just did not work,” Gov. Andrew Cuomo posited.

“In New York and across the country, Common Core has been more of a common problem,” Katz said. “Many parents—certainly from every neighborhood in Queens—agree that we need standards. That is not the issue. As a parent who does homework with my second grader every day, the curriculum and implementation are clearly flawed. I am pleased the governor is addressing the concerns of parents and is committed to swift and comprehensive reforms.”