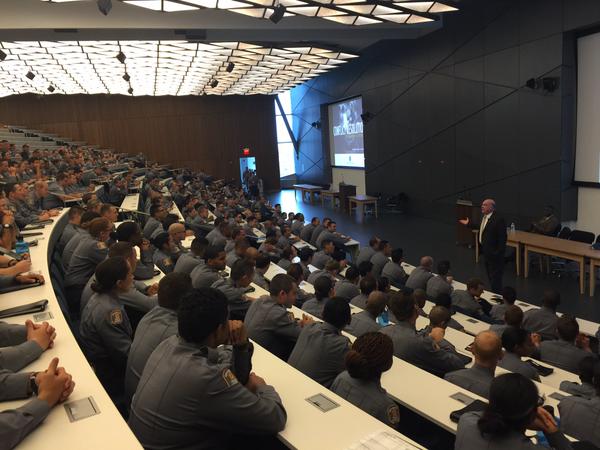 PHOTO:  NYPD recruits will be learning the new Use of Force Guidelines at the Police Academy in College Point.  Photo Courtesy of NYPD

Police Commissioner Bill Bratton last week announced what the NYPD has characterized as “sweeping reforms” to its use-of-force policy, including changes in how use of force is defined, how it is reported, and how it is investigated.

Bratton said that the Use-of-Force Committee, which was established last year, discovered that the guidelines and reporting standards about non-firearm-related uses of force were “not exemplary.”

Procedures “were inconsistent and scattered throughout the Patrol Guide. Definitions about what constitutes force were broad, or unclear, or absent. Reporting and investigating procedures were insufficient to capture the full range of possible uses of force,” the committee reported.

Bratton indicated that committee reforms include: A new NYPD Patrol Guide section – Section 221 – that concentrates in one place all policies bearing on use of force; clear definitions of the levels of force, and the reporting and investigation requirements at each level; Revised policies that require officers to intervene in and report any excessive use of force they may witness; Introduction of a robust and standardized Force Incident Report, designed to collect a wide range of pertinent data, allowing the Department to improve its understanding of how often officers use force and how often it is used against them. This report will allow the department to track and analyze all instances of use of force agency-wide; The establishment of a 54-officer Force Investigation Division, reporting directly to the First Deputy Commissioner, to investigate all firearms discharges and deaths in custody. This team has been up and running since July 1, 2015, Bratton said.

Other reforms include: Comprehensive rules governing how each of the newly defined levels of force will be investigated, based on the level of force and the type of injury, if any. There is an ascending investigative hierarchy: field supervisors investigating use of physical force or pepper spray, command-level executives investigating substantial physical injury or suspected excessive force, the Internal Affairs Bureau investigating cases resulting in serious physical injury or non-firearms deadly physical force, and the new Force Investigation Division investigating firearms discharges and deaths in custody; An NYPD Annual Use-of-Force Report, similar to the current NYPD Annual Firearms Discharge Report which will display and analyze all relevant data gathered by the use-of-force incident reports and use-of-force investigations, establishing a complete public record of NYPD uses of force each year; Annual recruit and in-service training in conflict de-escalation, in managing arrests and confrontational situations and in takedown tactics, when necessary, that protect both civilian and officer safety. More than 20,000 officers have received this training so far, with the remainder of the department scheduled to receive the training by the end of 2015 or early 2016, Bratton noted.

The Police Department also released its 2014 Annual Firearms Discharge Report last week. Bratton cited the NYPD’s success in managing firearms discharges as the model for how the department can manage other uses of force.

According to the report, total discharge incidents fell to 79 last year—the fewest in NYPD history—from 994 in 1972.

“Officers are more restrained than ever with their firearms because they have clear rules, they know there is oversight, and they train throughout their careers,” Bratton said. “We are now applying same policy, oversight and training principles to all uses of force, not just firearms.”