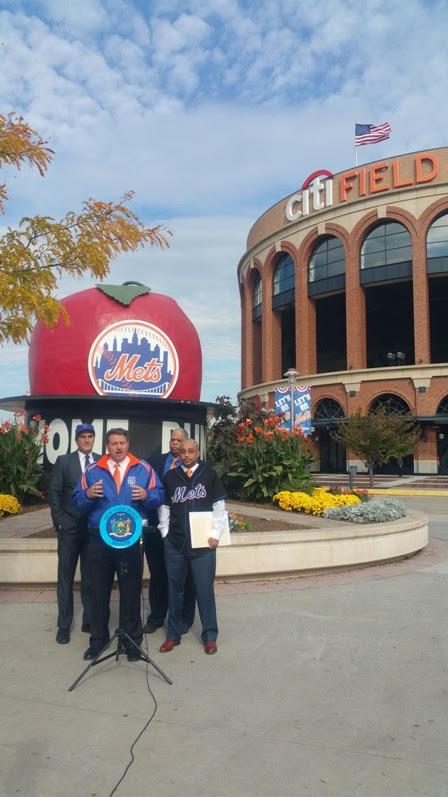 The gauntlet has been thrown down.

Four state senators from Queens this week announced the stakes of a bet the lawmakers made with legislators in the Chicago area on the National League Championship Series between the Mets and the Cubs.

Though the nuts and bolts of the challenge were hammered out over the weekend with Illinois State Senate President John Cullerton and his colleagues, New York Sens. Joe Addabbo, Jr. (D-Howard Beach), Michael Gianaris (D-Astoria), Leroy Comrie (D-St. Albans), and Jose Peralta (D-East Elmhurst) dished the details on Tuesday outside Citi Field.

The loser of the bet must send their home city’s pizza to the winner and congratulate the winning team on the floor of Senate Chambers wearing the team’s gear. The senators also agreed to host a clean-up day somewhere in their district wearing the winning team’s apparel.

With the Mets up 3-0 at press time, Cullerton and company might want to start warming up the deep-dish delivery vehicle.

“I have every bit of confidence in the Mets beating the Cubs and going to the World Series, so it only makes sense to raise the stakes by putting a little something more behind this series,” Addabbo said. “There are two things I know for sure: New York has better baseball and better pizza. I hope that Senator Cullerton looks good in blue and orange, and I wish our counterparts in Chicago the best of luck in coming up with a creative way to keep the deep-dish pizza warm while on its way to Queens.”

Peralta looked at the competition as “also a way to enrich the strong brotherhood between our great leading cities of New York and Chicago. Brothers or not, the Mets will obviously come out on top and move another step towards their dream of a World Series Championship.”

Betting on the Mets to win the NLCS was the easy part, Brown said. “Choosing which food to represent New York in the unlikely event that we have to pay up was difficult, as Queens is the most diverse county in America and a place where you can literally taste your way around the globe. In the end, we selected a food we felt best symbolizes our city and the Mets ball club – the iconic New York hero. Specifically, we are offering any of the mouthwatering Italian heroes made by Mama’s of Corona, which also has a stand at Citi Field where disappointed Cub fans can go when their team loses to the Amazin’ Mets.”

No word yet on the Chicago delicacy with which Alvaraez countered.