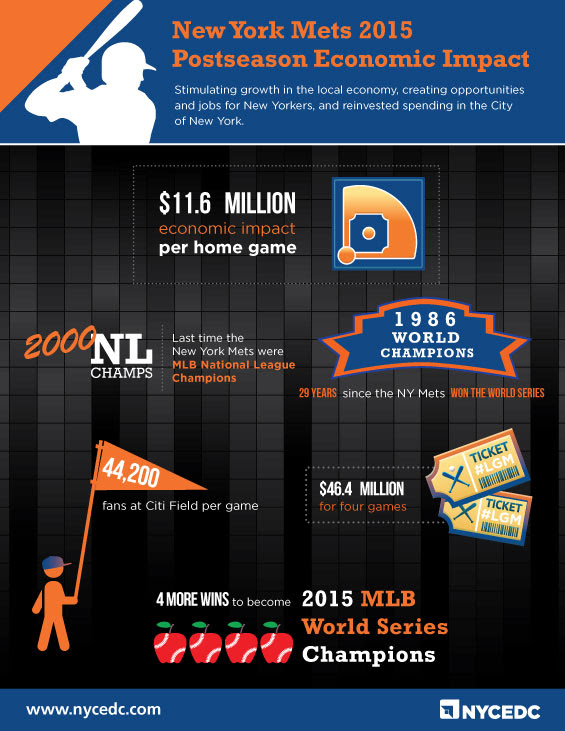 The NYCEDC analysis accounts for ticket sales, spending from nearly 30,000 visitors from outside of the five boroughs, and additional earnings for seasonal employees at Citi Field, as well as other factors. The impact, the agency said, stimulates growth in the local economy, creating opportunities and jobs for residents, and spending that is reinvested in the city.
The National League Champion Mets have played four postseason games thus far in Flushing, for a total economic impact on the city of $46.4 million. At least two World Series games will be played at Citi Field.

“The impact of the New York Mets postseason run transcends baseball,” said NYCEDC President Maria Torres-Springer. “Besides uniting our city in blue and orange, Mets games are providing a huge economic benefit that stimulates the local economy and provides opportunities for New Yorkers. I can’t wait to see the continued benefits of four more postseason wins.”

“Big events like the World Series attract visitors who may book rooms, eat out, explore neighborhoods and go shopping,” added Fred Dixon, president and CEO of NYC & Company, the city’s official marketing, tourism, and partnership organization. “But the value of hosting big events goes far beyond immediate economic impact. It adds to the city’s vibrancy and appeal, and with so many eyes on New York City during the World Series, people from out of town may be reminded that a visit is long overdue and be inspired to come here months after the World Series is over.”

According to the EDC, the city welcomed an all-time record 56.4 million visitors last year, generating a record $61 billion in overall economic impact, supporting 362,000 jobs and $21 billion in wages. Major events like the World Series, the agency added, contribute to the economic impact of visitation and visitor spending.