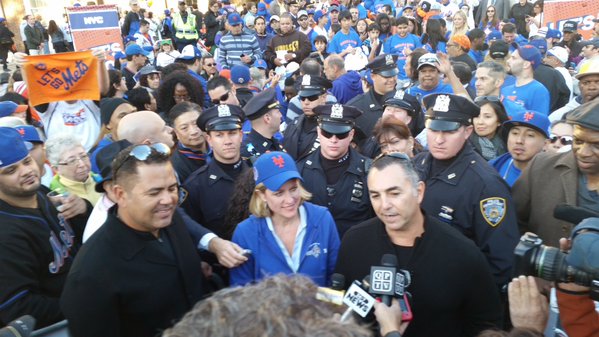 The plaza outside Borough Hall on Monday afternoon was drenched in blue and orange as hundreds of Mets fans joined Queens Borough President Melinda Katz and Amazin’ alumni for the massive “New York City United – Hometown Rally for the Mets.” 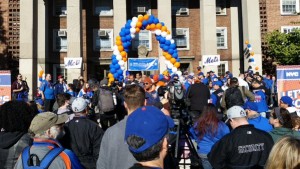 Hundreds descended on Borough Hall to cheer on the Amazins before they took on the Kansas City Royals in the World Series.

“The World Series is coming back to the World’s Borough,” Katz said. “Congratulations to the Mets on their sweeping victory in the National League Championship Series. The Mets have done all New Yorkers proud, redeeming millions of loyal fans and even inspiring a few more. The Amazins played with true grit, determination and heart – trademarks of every New Yorker – in clinching their first National League championship since 2000. New York is united as one sea of blue and orange behind the Mets in this captivating run. Ya Gotta Believe – now Let’s Go Mets!”

Additional giveaways and chances to win prizes were provided by WOR 710AM Radio, the flagship radio station of the Mets; WFAN 660AM/101.9FM Sports Radio and the “FAN Van”; and the NYPD.