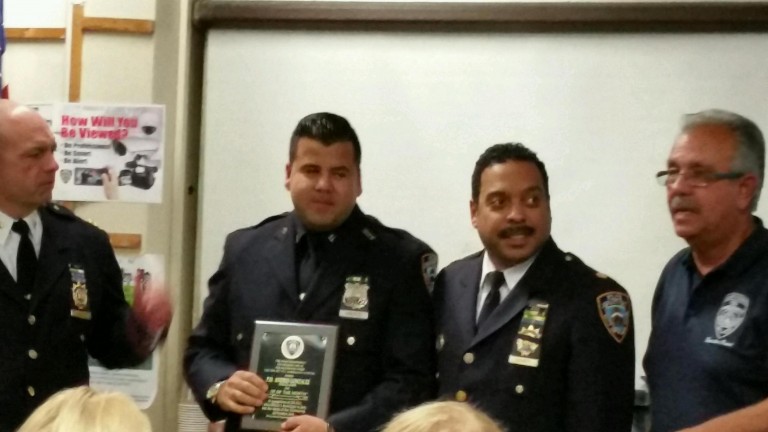 Deputy Inspector Jeff Schiff, commanding officer of the 106, presented Officer Gonzalez with a plaque for his actions in arresting three suspects in three separate incidents.

On Sept. 2, around 11 a.m., Gonzalez observed a young man walking down 135th Street in South Ozone Park with a red bandana—a “significant gang indicator”; in this case the Bloods—tied around his neck. Gonzalez knew this to be Crip territory, and that the Bloods and Crips have an acrimonious relationship spanning several decades. He also noticed that the young man kept one hand tucked under the waistband of his pants. As Gonzalez exited his vehicle, the suspect threw his hands up in a gesture indicating surrender. At this point, according to 106th Precinct Community Affairs Det. Kenneth Zorn, a reasonable suspicion stop was conducted, and when Gonzalez asked the suspect if he had any weapons on him, he said yes. He was immediately placed under arrest and a loaded .45-caliber gun was recovered from his short’s pocket that was worn underneath his sweatpants. 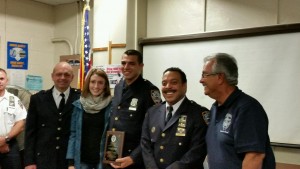 On Oct. 7, around 10 a.m., Officer Gonzalez chased down and apprehended a man who had been striking another man with a hammer on the corner of Liberty Avenue and 113th Street.

And on Oct. 29, around 10:30 a.m., Gonzalez conducted a successful canvass for an intruder who had assaulted a female victim in her residence and tore off her necklace and bracelets. Gonzalez caught up to the suspect in his Lexus at 103rd Street and Centreville Street.

Police Officer Morgante earned October Cop of the Month honors after he and his partner helped put a dent in recent deserted residence burglaries in the 106th Precinct.

On Oct. 30, around 1:30 p.m. a witness observed two men attempting to gain entry into a house on 133rd Avenue in Ozone Park by drilling out the front-door lock. Zorn said that “we have had a number of similar abandoned-house burglaries who then turn into squatters or scam unsuspecting potential buyers/renters.”

Morgante and his partner apprehended Michael Broomfield and Joseph Fernandez and placed them under arrest. Both were arraigned on three charges: one count of third-degree attempted burglary, a class E felony; misdemeanor criminal mischief; and misdemeanor possession of burglary tools.