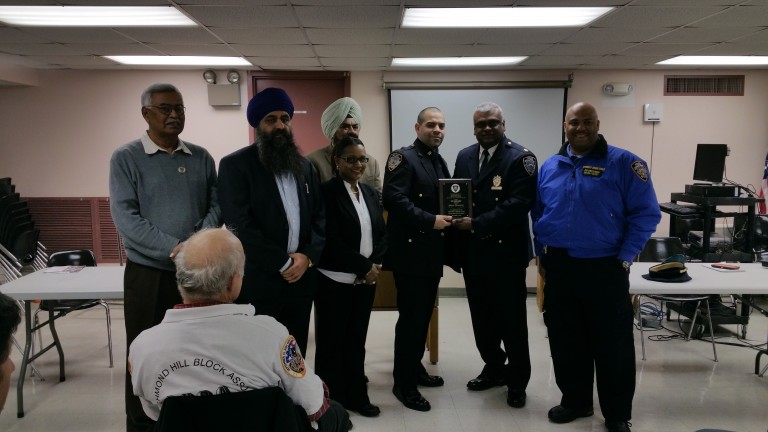 In its final meeting of 2015, the 102nd Precinct Community Council on Tuesday presented a veteran plainclothes police officer with Cop of the Month honors.

It was an active October for PO Louis Soto, according to Deputy Inspector Deodat Urprasad, the commanding officer of the 102. In two separate incidents, Soto arrested five people and recovered a stolen sawed-off shotgun, one of three firearms retrieved by 102 officers in the past 30 days. Soto nabbed four men—who had 26 arrests between them—in a single car stop; three of the four are still incarcerated.

“He had a busy month,” Urprasad said of Soto as he presented him with the plaque.

Overall, the command comprised of the communities of Richmond Hill, Kew Gardens, Woodhaven, and part of Ozone Park has been swamped. While crime is down roughly 10 percent over the past month, compared to the same period last year, robberies continue to be “an issue,” Urprasad acknowledged, adding that robbery arrests are also up in the precinct.

“This is the holiday season—throughout the city we’re going to face the problem of robberies,” he noted.