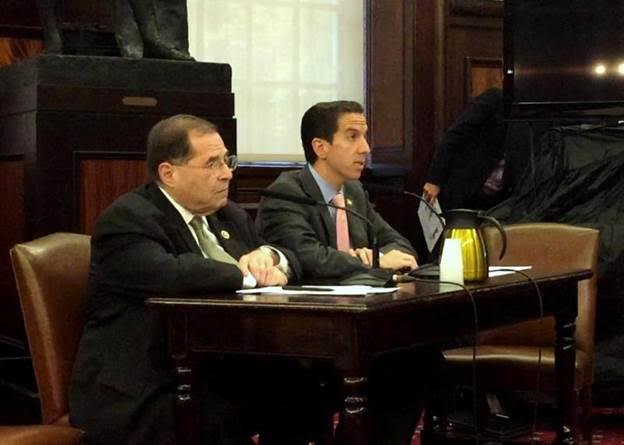 PHOTO:  U.S. Rep. Jerry Nadler (l.) and Assemblyman Phil Goldfeder last week delivered joint testimony at a City Council oversight hearing on how to help communities known as ‘transportation’ deserts. Nadler and Goldfeder testified in support of a Council Resolution calling on the MTA to conduct a feasibility study of the Rockaway Beach Rail Line and other city-owned railroad rights-of-way. Photo Courtesy of NYS Assembly

The City Council Committee on Transportation last Thursday convened an oversight hearing at City Hall that assembled experts from government and advocacy groups to consider various Council proposals to improve access to mass transit in underserved communities in all five boroughs.

The conference — “Next Stop: Exploring Methods of Connecting Transportation Deserts” — examined areas, like swaths of southern Queens, that have limited access to transit resources.

At six hours and 18 minutes per week, city residents currently suffer the longest work commute of any large city in the nation, according to City Councilman I. Daneek Miller (D-St. Albans). But for those in transportation deserts in Queens, commutes can exceed 15 hours per week.

The U.S. Census Bureau classifies this as an “extreme commute,” Miller noted.

So the former transit union official detailed his Resolution 670 proposal in testimony at last Thursday’s hearing. The legislation would equalize commuter rail fares to that of a ride on New York City Transit subways and buses. It also calls for a free transfer between all three of these Metropolitan Transportation Authority systems.

Commuter rail fare equalization, according to Miller, will increase access to over 40 Metro North and Long Island Rail Road stations within the five boroughs, and serve to shorten commute times. Miller said he believes that improved access to commuter rail transit will also spur development in communities serviced by these railroads.

Metro North and Long Island Rail Road stations serve the Bronx, Brooklyn, Manhattan and Queens. Currently, fares for the two rail systems are significantly higher than subways and buses, and fluctuate based on time, day and destination.

“This is an issue that cannot wait and that we must immediately begin to address,” Miller noted. “Considering the minimal cost of creating parity between commuter rail fares to that of subways and buses, it’s a no-brainer. Commuter rail fare equalization is a great economic opportunity and chance to raise the quality of live in our communities.”

Additionally, Assemblyman Phil Goldfeder (D-Howard Beach) and U.S. Rep. Jerry Nadler (D-Brooklyn and Manhattan) testified last Thursday in Council Chambers in support of a Council resolution calling on the MTA to conduct a feasibility study of the Rockaway Beach Rail Line and other city-owned railroad rights-of-way.

“Throughout southern Queens and Rockaway, our families are forced to endure some of the longest commutes in the entire city,” Goldfeder testified. “On normal days, a morning commute by train to midtown could easily take an hour and a half. By car, commuters face deteriorating roadways and unbearable gridlock on the Belt Parkway, Van Wyck Expressway and along Cross Bay and Woodhaven Boulevards. This means less time spent at home with loved ones and decreased productivity in the workplace.

“It wasn’t always this way,” he continued. “From the late nineteenth century until the mid-twentieth century, a branch of the Long Island Rail Road connected the Rockaway Peninsula to central Queens via an elevated train line through Ozone Park, Woodhaven and Rego Park. The Rockaway Beach Rail Line, also known as the White Pot Junction, provided a 30-minute single-seat ride to midtown Manhattan. To this day, many of my older constituents will come up to me and tell stories from their childhood about riding the Rockaway Beach Rail Line into the city.”

Nadler, a member of the House Committee on Transportation and Infrastructure, called the reactivation of the Rockaway Beach Rail Line the chance to “right a historical wrong” and create a one-seat ride from John F. Kennedy International Airport to midtown Manhattan.

In 2014, Goldfeder and Nadler trumpeted a Queens College study of the RBRL that estimated the cost of reactivating the old right-of-way at approximately $1 billion, and predicted it could serve upwards of 250,000 riders per day.

“There is no greater asset to our transit network than existing rights-of-way. With the Rockaway Beach Rail Line and the other underutilized rights-of-way throughout the city, we have a once-in-a-lifetime opportunity to make lasting improvements to our transportation network and meet the demands of our growing populations,” Goldfeder said as he wound down his testimony. “I fully support the proposed Council Resolution 903-2015 calling on the MTA to study the potential use of these vital assets; and urge the City Council to continue its advocacy on behalf of our families as we work to end transportation deserts and create the equal access to transit options we deserve. As Queens residents, we are not asking for more than others, but rather for a fair share, to give our families the opportunity to thrive and grow.”