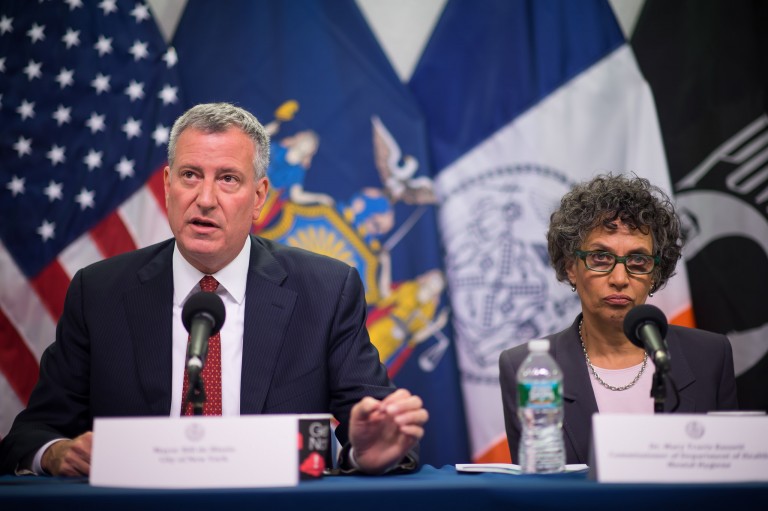 A Substance Abuse and Mental Health Services Administration study indicated that at least one in five adult New Yorkers is likely to experience a mental health disorder in any given year.

Eight percent of city public high school students report attempting suicide, according to a Youth Risk Behavior survey conducted by the departments of Health and Mental Hygiene and Education.

There are $14 billion in estimated annual productivity losses in the five boroughs tied to depression and substance misuse, according to raw data from “Behavioral Health in New York City: The Burden, Cost, and Return on Investment.”

They are just four entries on a list of jarring statistics in a 15-page white paper released last Thursday by the de Blasio administration detailing the size and scope of what it characterized as the “mental health crisis” facing the five boroughs.

“The result of months of brand new research commissioned by the New York City Department of Health and Mental Hygiene, this white paper details—with never before released data—the scale of the problem, and its effects on all of us as New Yorkers,” the administration noted in its introduction.

“Mental illness exacts a devastating social and economic cost on New Yorkers and the communities they call home,” the paper reads.

According to the document, one metric frequently used to describe the impact of mental illness on society relative to other health problems is Disability Adjusted Life-Years, which measures the number of years lost to a given disease as a result of loss of life or disability.

“In other words, DALYs quantify both what makes us feel sick and what kills us. Together, these are often referred to as the ‘disease burden,’” the administration said.

Mental illness and substance use disorders are among the leading contributors to the disease burden for New Yorkers, with depressive illness the single largest contributor after heart disease.

Disability related to mental illness can have significant real-life consequences for New Yorkers. It can lead to job loss, dropping out of school, struggles with parenting, housing, having difficulty making and keeping friends, and other challenges, according to the white paper.

Additionally, in the city, mental illness and substance misuse together have “a tremendous impact” on health care, criminal justice, and lost productivity. Alcohol misuse is estimated to cost NYC nearly $6 billion in citywide economic productivity losses every year, while depression accounts for $2.4 billion in losses. Misuse of illicit and prescription drugs and alcohol across the five boroughs together cost approximately $1 billion in criminal justice expenditures annually.

The paper also acknowledged that many questions remain about where and how mental health threats take root, how to better match what we are doing with where we can make the biggest impact, and the comparative value and quality of treatment and intervention options.

In the coming weeks, the administration has indicated it will release ThriveNYC – “a comprehensive roadmap” for promoting mental health in the city.

“The first step towards building a mental health system that can support the well-being of the thousands of New Yorkers dealing with mental health challenges is a full understanding of the depth of the problem,” according to the administration.