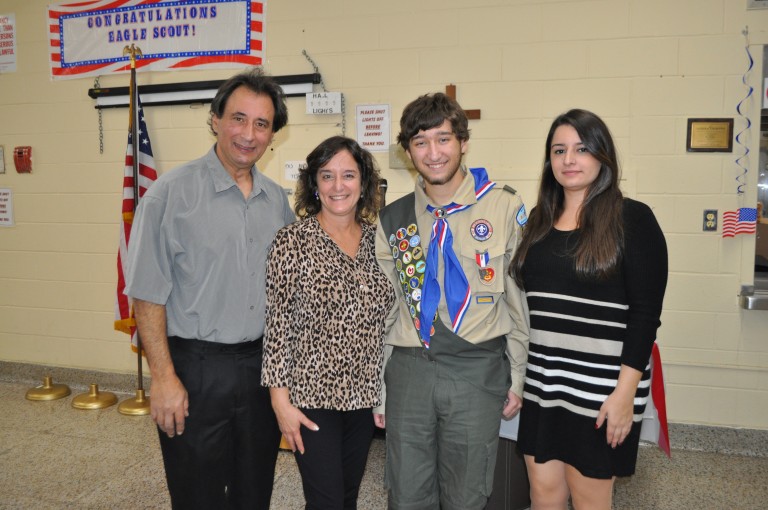 It is that unexampled relationship that begins as natural bond, one that is strengthened over time through the lessons the father, as consummate teacher, passes on to his son, who, regardless of age, is ever the student, always at the mentor’s knee.

Friends, family, and members of the Howard Beach community last Saturday had front-row seats to a milestone that has bolstered the bond that Peter and Phillip Granickas—father and son—know and nurture almost daily.

In an afternoon ceremony at St. Helen Catholic Academy, Phillip, 17, earned the prestigious rank of Eagle Scout, roughly 10 years after he signed up for Cub Scouts at the urging of his dad, once a Boy Scout himself, who “saw an ad in the paper about meetings at St. Helen’s.”

“We just thought it would be good bonding for us at the time,” Phillip Granickas recalled. “It just kind of grew on me over the years. I never gave up on Scouting, and here I am: an Eagle.”

Granickas, who lives in Old Howard Beach, thanks his parents for that unwavering attitude.

“They raised me to never be a quitter,” he said of Peter and Barbara Granickas.

Over the years, as he earned badges and ascended up the ranks, Phillip noticed that the same life lessons he was soaking up at home were being reinforced in Troop 139.

“Never give up on yourself, and really try to go out and be the best person you can be every day,” are among the indelible pearls of wisdom Phillip gleaned and fortified both at home on 100th Street and with his brother Scouts.

Phillip Granickas applied those lessons to his Eagle Scout Project: beautifying and refurbishing the 165th Avenue entrance to Frank M. Charles Memorial Park. He replanted bushes and built planter boxes with milkweed for natural pollinators like bees and butterflies.

“I always noticed how bad the entrance looked and said ‘This would be a great project if I could fix this up,’” Granickas related.

Six months later, Granickas was in St. Helen’s, last Saturday afternoon, his mind on his nerves and different butterflies – the ones bombarding his abdomen. The John Jay College of Criminal Justice freshman was understandably “extremely nervous;” he was about to become an official Eagle Scout, the Boy Scouts of America’s highest rank.

But, as the large audience of supporters and well-wishers learned, last Saturday wasn’t all about Phillip. It was about fathers and sons.

It was about Peter Granickas, too, and how Phillip honored his proud dad by giving him the Mentor pin.

“Because he was the one who first got me into Scouting, and taught me a lot along the way…like how to pitch a tent and make the fastest Pinewood Derby cars,” Phillip said.

He then paused for a moment or three, as if something had suddenly dawned on him.

“If I had a son, I would definitely get him involved in Scouting,” Phillip Granickas noted. “It’s a great experience.”