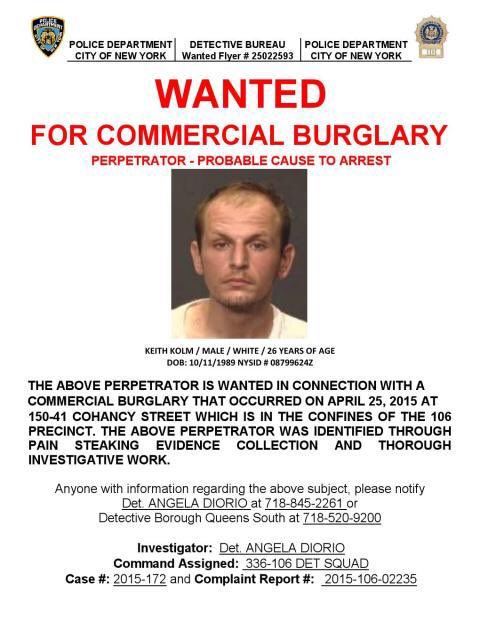 Keith Kolm, the gadfly recidivist burglar who has been a thorn in the side of several communities and commands, especially the 106th Precinct in which he resides, surrendered to authorities last Thursday, according to Deputy Inspector Jeff Schiff, the commanding officer of the 106.

Kolm, 26, had been sought by 106th Precinct detectives in connection with an April commercial robbery on Cohancy Street in Ozone Park. According to the wanted poster, Kolm was identified “through painstaking evidence collection and thorough investigative work.”

“Let’s get him b4 he wreaks havoc in our community!” Schiff posted to Twitter prior to Kolm’s surrender.

The Hamilton Beach resident has been linked to a string of spring burglaries along Cross Bay Boulevard. Investigators believe Kolm is responsible for stealing an automated teller machine out of a Key Food store, and that he is the perpetrator of an incident at a KFC restaurant in which a safe was stolen and an ATM ransacked.

Cops caught up to Kolm at the end of April. According to police, on Thursday, April 30, he allegedly made a bogus 911 call from his cell phone in Hamilton Beach alerting authorities to “an undercover cop being beaten” at Linden Boulevard and 135th Avenue.

“A 1013 call—police officer in need of assistance—pulls resources to one spot and away from him and the Hamilton Beach house,” noted Det. Kenny Zorn, 106th Precinct Community Affairs officer.

Plainclothes cops who had been sitting on Kolm’s house also responded to the 911 call. However, when they returned to Hamilton Beach, they observed Kolm leaving the residence. A 40-minute foot chase ensued, with Kolm hopping from yard to yard and residents telling cops “There he goes! There he goes!” Zorn said. He was eventually grabbed on a roof on 163rd Drive.

Kolm posted bail approximately a week later, and seems to have been treating the system like a revolving door since.

According to court records, Kolm is fighting no less than seven open cases: three in Queens, three in Nassau County, and one in Brooklyn.