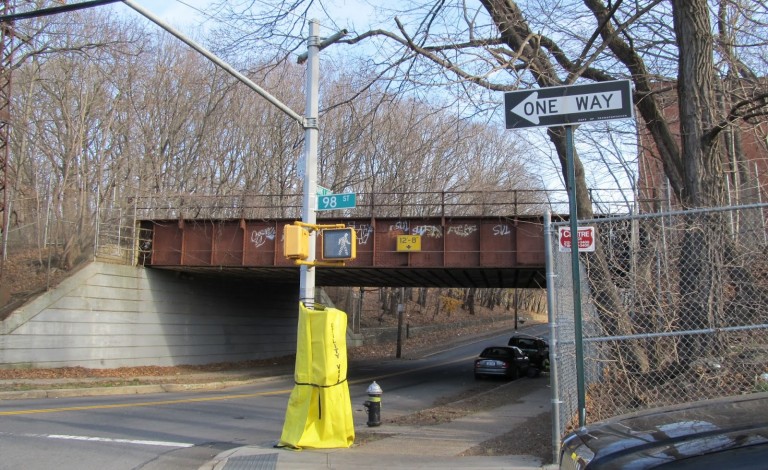 Days after learning that the city Department of Transportation has decided to delay by a year the implementation of a Select Bus Service route along the Woodhaven-Cross Bay Corridor, the Woodhaven Residents’ Block Association sent a letter to DOT Queens Borough Commissioner Nicole Garcia, urging the agency to consider an alternative rapid transit idea that has the community buzzing: running bus service along the defunct train tracks of the Rockaway Beach Rail Line right of way along 98th Street.

For more than three years, the civic’s position has been that the abandoned railroad should be left as is. However, according to the WRBA, the controversy over the SBS design proposal that was adopted in March has led the civic to consider alternatives and to urge DOT to study the Busway.

After DOT and the Metropolitan Transportation Authority developed three SBS design concepts, they were presented to the affected communities over the course of a year through meetings, workshops and open houses. Design Concept 2, a “transit-oriented boulevard” where buses travel in designated lanes in the main roadway, was selected in late March.

According to DOT, this concept provides faster and more reliable bus service, allowing buses to travel free from turning or parking conflicts, with an anticipated travel time savings of 25 to 35 percent. Median transit stations with shelters, seating, and real-time bus information will be constructed, giving passengers high-quality waiting areas.

Woodhaven and Cross Bay boulevards are both identified as Priority Corridors in DOT’s Pedestrian Safety Action Plans, with 24 fatalities since 2008 on the length of the SBS route, which is based on the existing Q52/53 Limited bus route and carries 30,000 daily bus riders over 14 miles from the Rockaways to Woodside.

Aligning with Mayor Bill de Blasio’s Vision Zero initiative, Concept 2 will have new medians for pedestrian refuge and a greener streetscape, DOT officials noted. There will be a physical separation of local and thru traffic, allowing thru traffic to travel free from parking and turning conflicts and local traffic to travel through calmer service roads.

The controversy surrounding Design Concept 2 stems from subtraction: The plan calls for the removal of a lane of traffic in both directions in order to create a Bus Only lane for the Q52 and Q53 routes; and the removal of left-hand turns at certain junctions on Woodhaven or Cross Bay boulevard.

“The process that DOT used to come up with its SBS design concept was severely flawed, and if it were implemented, it would be extremely detrimental to our community,” said WRBA President Martin Colberg. “We believe the Busway would likely be much better for our community, and we hope that other neighborhoods join us in urging DOT to consider it.”

The 12-page letter to Garcia boasted possible benefits of the Busway: it’s close to Woodhaven Boulevard and runs parallel to it; avoids buses having to share the road with other vehicles; it would allow buses to travel safely at faster speeds because there are no intersections or red lights; it is a better option for properties abutting 98th Street than reactivating train service or converting it to a park; and it allows riders to wait for buses in relative peace and safety.