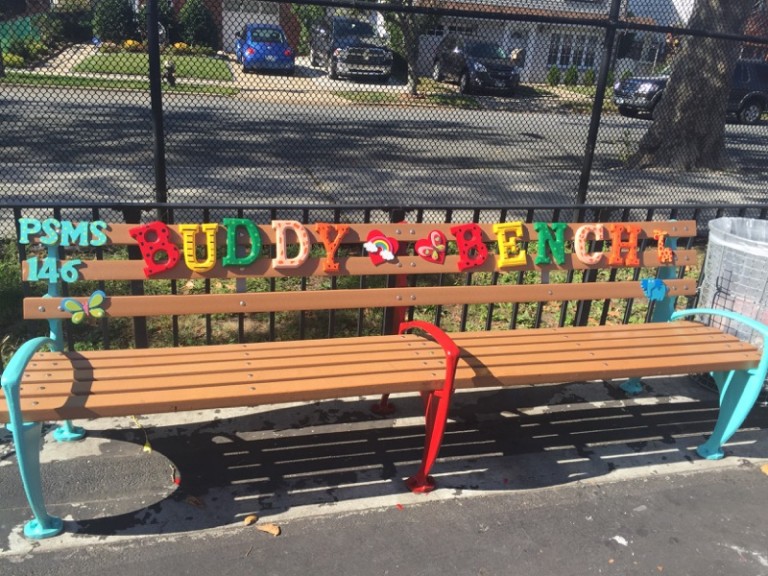 ​PHOTO:  Using design input from her students, PS/MS 146 art teacher Jodi Tucci crafted the Buddy Bench, which was installed in the schoolyard in October.​ Photo Courtesy of Jodi Tucci​

Thanks to the tireless efforts of a veteran public-school art teacher and her students, it seems that one of the most important additions to the PS/MS 146 community is here to stay.

Since its inaugural appearance in the Howard Beach school’s yard in October, the Buddy Bench – a piece of furniture that aims to help foster friendship and eliminate loneliness – has been vandalized at least twice.

Heartless individuals ripped off the bench’s wooden letters and left them discarded on the asphalt.

“I kept telling them, ‘Don’t worry, I’m going to fix it,’” art teacher Jodi Tucci recalled trying to pacify her young charges that were left crying and heartbroken at the sight of the damaged bench that they helped design.

Tucci said she then used Gorilla Glue to affix the letters to the bench—but in short time they were destroyed again.

Tucci, who has been an educator at 146 for 19 years, then turned to community leader Joe Mure for help.

Mure enlisted the aid and expertise of Fred Ianelli, supervisor of the Craftsmanship program at Lifestyles for the Disabled on Staten Island. Ianelli and his students in early November refurbished the Buddy Bench and bolted the wooden lettering to it.

Tucci said she hasn’t had a problem since.

“The kids were so excited,” Tucci noted. “It really beautifies our schoolyard.”

The idea to bring the Buddy Bench to 146 sprouted from the mind of 4th grader Olivia. She approached Principal Mary Keegan, who turned over the reins to Tucci.

“The whole concept of it is to be a good friend,” Tucci said. “We didn’t give up on it. We kept persevering—that’s my message.”

Tucci has been imparting that keep-going credo in her classrooms since she began teaching in PS 207 20 years ago. Asked why she became an educator, Isabella’s mom paused, then reasoned, “I get such joy out of getting them to love learning. I’ve always thought that this was the right thing for me, to inspire the little ones…I love it.”