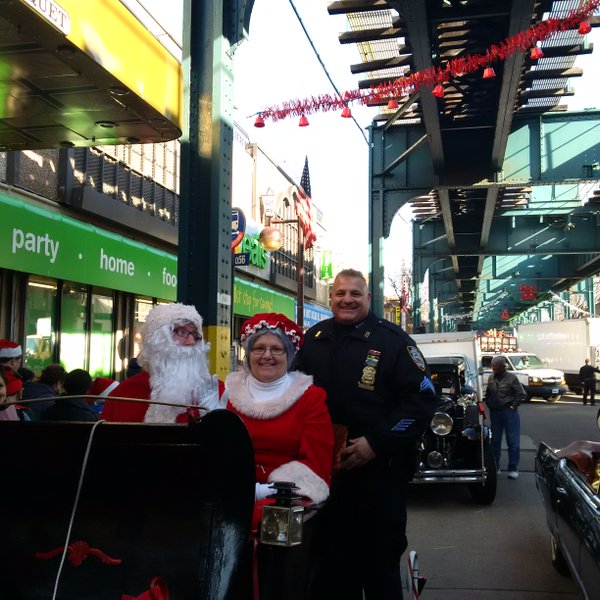 It’s beginning to look a lot like Christmas in Woodhaven.

Revelers last weekend were treated to two annual traditions that signify the arrival of the holidays in the proud south Queens community: the lighting of the Forest Parkway Plaza Christmas tree on Friday night, and the Santa Parade along Jamaica Avenue the following afternoon.

The majestic Christmas tree at Forest Parkway Plaza near Jamaica Avenue is always a popular attraction for families.

Sponsored by the Woodhaven Business District and the Greater Woodhaven Development Corporation, the tree-lighting is more than a simple flip of a switch—it’s a neighborhood celebration, replete with caroling, characters, and the Clement Clarke Moore classic “Twas the Night before Christmas.”

And there was a palpable added appreciation of this year’s Santa Parade, as inclement weather forced the cancellation of the 2014 pageant.

“Holiday events in Woodhaven, such as the tree lighting or the Santa Parade, give the community a sense of continuity,” said Ed Wendell, president of the Woodhaven Cultural and Historical Society. “Parents are bringing themselves to events that they themselves attended as children. At the same time, it gives people who are new to our community the opportunity to gather and celebrate something special, yet new to them. These events really give off a nice small-town vibe, where neighbors know each other and greet each other warmly.”