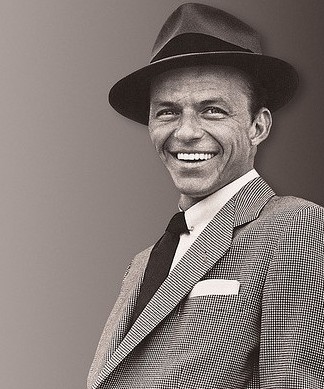 That unmistakable swagger. The show-stopping showmanship. The piercing blue eyes. And that incredible voice, like warm caramel syrup on the best sundae you ever ate.

December 12 marks what would have been Frank Sinatra’s 100th birthday. A host of centennial tributes have been held around the country since January, including a Grammy-sponsored concert in Las Vegas this past Sunday night.

Frank Sinatra’s music transcended genre and generations, from even before the time of his first album release in 1946, until beyond the release of his last in 1994. Few among us can’t name at least one of the more than 1400 ditties Sinatra recorded in his lifetime. Over a 50-year span, the crooner from Hoboken had at least one song on the charts per year. He received many awards along the way, including the Presidential Medal of Freedom, presented to him by Ronald Reagan, and a Lifetime Achievement Award from the NAACP, for his efforts to fight racism in and outside of the music industry.

The Chairman of the Board, as he was also known, had a successful acting career, too, with more than 50 movies under his belt, including From Here to Eternity, for which he won an Academy Award, The Man with the Golden Arm, and the classic Goldwyn musical, Guys and Dolls.

Sinatra got his break singing with a group called the Hoboken Four in the late 30’s and was eventually picked up by Tommy Dorsey’s orchestra, where he became widely recognized as the top band vocalist in the country. In addition to his superior vocal ability, his good looks appealed to teenaged girls, and born was a sensation – even in the buttoned-up time — foreshadowing the appeal of many performing artists today.

A little known fact: Sinatra was not a New York City Cabaret Card holder. These cards, until 1967, were required of all employees and performers in night clubs and were denied or revoked for a variety of often ambiguous reasons, including criminal affiliations, drug use, or actions or attire deemed inappropriate by the City. Sinatra refused to apply for one, on principle. Thus, his New York fan base had to travel elsewhere to hear “The Voice” live in clubs.

Evidence of Sinatra’s multigenerational appeal was present during the Grammy tribute, where Sinatra staple songs were performed by a wide range of artists, from Garth Brooks to Adam Levine, with particularly memorable renditions by Lady Gaga, Alicia Keys, and animator Seth MacFarlane, who should, in this case, quit his day job if it means we’ll get to hear more of the surprisingly beautiful singing voice which managed to authentically and almost spiritually capture Sinatra.

Fittingly, Sinatra’s final album was a batch of duets recorded with greats from multiple eras and genres, such as Patti LaBelle, Lena Horne, and Willie Nelson. Not quite the sales success of the first Duets album, Duets II nonetheless resounds as testament to another of Sinatra’s musical skills, that of timing, though the duet partners were not present in the studio during the taping of his vocals.

A new album of rare Sinatra radio recordings, A Voice on Air, was released last month; this means we all get a very special birthday present from the Chairman. The centennial also grants another opportunity to say farewell to Queens’ own Gary Russo, who died earlier this year. Dapper and blue-eyed himself, Russo gained notoriety as an amateur performer in Sinatra’s swing style.