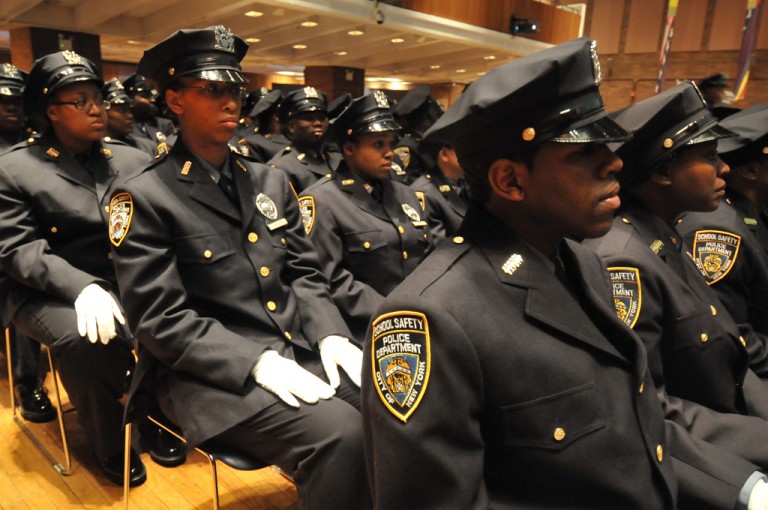 PHOTO:  While NYPD School Safety agents patrol public schools, a new piece of legislation, approved this week by the City Council, will allow the city to foot the bill for security guards at private and religious institutions across the five boroughs. Photo Courtesy of NYPD

Under a controversial piece of legislation that was overwhelmingly approved by the City Council on Monday, private and religious schools will get security guards—and taxpayers will be footing the bill.

Introduction 65-A, which passed by a tally of 43-4, will cost roughly $20 million, with schools being reimbursed by the city for expenses incurred by hiring the state-certified, unarmed sentries.

The bill, which is scheduled to go into effect April 1, 2016, was introduced by Councilman David Greenfield (D-Brooklyn) nearly two years ago.

“This monumental legislation recognizes that every child, regardless of where they go to school – whether public or private, secular or religious – deserves to learn in a safe environment,” Greenfield said. “Coming on the heels of two anti-Semitic crimes in my district last week and a rise of religious bias crimes in New York City, this legislation is more important than ever.”

Qualifying schools include non-profit schools in the five boroughs with 300 or more enrolled students, providing instruction in accordance with the education law and serving students in any combination of grades pre-Kindergarten through 12.

Reimbursable costs include expenses related to hiring, training and wages for guards providing security services during school hours, school-related after school programs and athletic events. The number of security guards provided to each school will be based on the number of students.

The United Federation of Teachers and several education organizations denounced the bill. The New York Civil Liberties Union characterized the measure as “a scheme to divert tens of millions of dollars away from our struggling public school kids.”

“The bill…will reach into overstretched city coffers to reimburse schools that already charge tuition to their students,” said Johanna Miller, advocacy director at the NYCLU. “To suggest that these private, sectarian institutions that receive monetary support from their students and private donors should be financially supported by the city as well is not only bad policy, it is an example of unconstitutional government support for religious institutions. In a city as diverse as New York, where many public school kids lack access to working computers, it would be shameful for city leaders to offer precious taxpayer money to private institutions.”

Council Speaker Melissa Mark-Viverito said, “Students across our city deserve a safe learning environment, no matter what community they come from or where they attend school. With this bill, we’re reaffirming that message and showing our commitment to all students in New York City.”