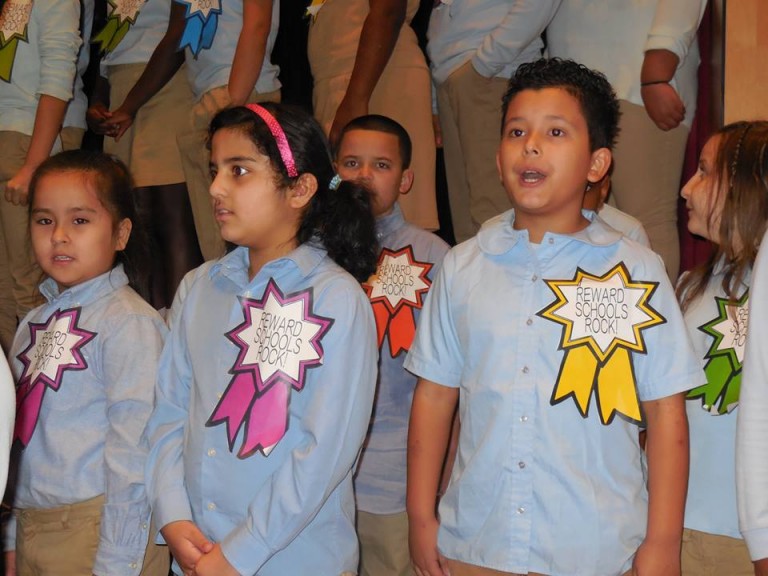 PHOTO:  Public School 254 students joined parents, teachers, and administrators last Friday in celebrating the honor of being named a Reward School by the State Education Department. Photo Courtesy of the Council of School Supervisors and Administrators

PS 254 is one of 143 city public schools to earn the Reward honor. To be identified by the state Education Department as a Reward School, a school must: Be among the top 20 percent of schools in the state for English language arts and math performance for both the 2012-13 and 2013-14 school years, or be among the top 10 percent of schools in terms of gains in ELA and math performance in the 2013-14 school year; have made Adequate Yearly Progress for the 2012-13 and 2013-14 school years for all groups of students on all measures for which the school is accountable, including the requirement that 95 percent of all groups participate in the English language arts and mathematics assessments; not have unacceptably large gaps in the student performance on an accountability measure between students who are members of an accountability group (e.g., low-income students) and students who are not members of that group.

In addition, elementary and middle schools must demonstrate that students are making annual growth in ELA and math that exceeds 50 percent and that the school’s lowest achieving students are also making gains that exceed 50 percent.

“Our goal was to create a school where children wanted to come to learn, a place where they could interact and become critical thinkers,” said PS 254 Principal Naomi Drouillard. “We also believe very strongly in parental involvement. The Rosa Parks School isn’t just a building; we are part of this community.”

Each Reward School will receive a certificate of recognition from NYSED Commissioner MaryEllen Elia. Title I Rewards Schools that have been identified as Reward Schools based on both 2012-13 and 2013-14 school year results are eligible to apply for a grant, if the school is not currently receiving this grant.

This isn’t the first time that PS 254 has earned academic honors. It was designated a Blue Ribbon School of Excellence and a Title I School of Distinction in 2010.

“The whole school has worked diligently to ensure that each child receives rich experiences,” Drouillard said. “We pride ourselves in laying the foundation for middle and high school, college and ultimately for all of our students to have a successful and rewarding career.”