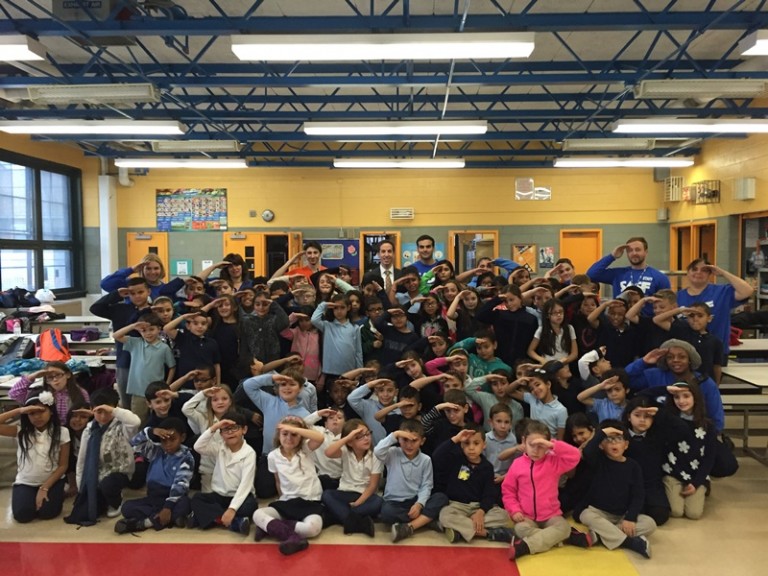 The students at PS 146 in Howard Beach this week teamed up with the nonprofit Sports and Arts in School Foundation to send care packages to U.S. troops serving in Afghanistan.

Sponsored by Assemblyman Phil Goldfeder (D-Howard Beach), and spearheaded by students and SASF, the effort is the children’s way of giving stocking stuffers to soldiers overseas, according to PS 146 teachers.

Goldfeder visited the 159th Avenue school on Monday as students prepared to send the packs – which include toiletries, snack foods, books and card games, as well as handmade holiday ornaments and cards designed by Class 301 – to a New Jersey-based naval platoon stationed in Afghanistan.

Goldfeder donated $300 to cover postage costs for eight packages filled with items collected by over 100 students in Kindergarten through 5th Grade.

“Our brave men and women in uniform spend their holidays fighting overseas so that we can enjoy time here with family in peace and security,” Goldfeder said. “The students at PS 146 deserve tremendous credit for preparing care packages for our troops and helping make them feel special. I’m honored to sponsor their packages to the soldiers and contribute to this important effort.”

Goldfeder thanked the children for making this holiday about more than themselves.

“These students have shown true leadership,” he added. “Their thoughtful actions embody not just the spirit of the holiday season, but the sense of duty and service that our troops show each and every day.”

SASF recently received a three-year city Department of Youth & Community Development grant for after-school and summer camp programs at 146. According to the organization, SASF is one of the largest providers of school-based after-school programs in the city and metropolitan region, serving more than 20,000 students in over 150 public schools.