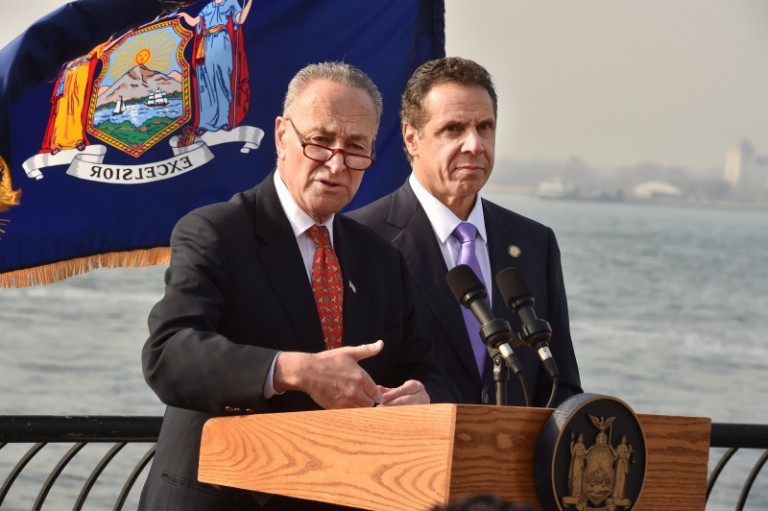 PHOTO: A week after Sen. Schumer (at podium) and Gov. Andrew Cuomo called on the federal government to add the U.S. Terror Watch List to the criteria it uses for federal background checks in New York, Schumer demanded that Congress come up with a plan to stem the rapid rise of terrorist use of social media.Photo Courtesy of Kevin P. Coughlin/Office of the Governor

U.S. Sen. Charles Schumer this week called on Congress to pass legislation in the Senate that aims to modernize the way the federal government deciphers, disrupts, and decodes the social media methods of terror groups and terror suspects.

The Combat Terrorist Use of Social Media Act of 2015 just passed the House of Representatives and is now on its way to the upper chamber. The legislation ‎would enhance the way Congress and the administration work together to analyze and assess how social media has become the medium of choice for terrorists and terrorist-messaging methods here and abroad.

Schumer points to ISIL, which is known to utilize social media when communicating with and encouraging new sympathizers, as the main reason to support a full review of how the U.S. coordinates and assesses the role social media is playing in the fight against terror.

“The federal government needs to modernize the way in which it deciphers, disrupts and decodes the social media techniques of terrorist organizations and groups,” Schumer said. “And we must definitely screen the public postings of those seeking visas to make sure they are not affiliated with a terrorist organization. This legislation would require the federal government to refine the ways we both assess and participate in social media. Our government has the capability to stay on top of these terror groups—and we do a fine job—but we can do this more extensively and efficiently. The bottom line is: something needs to be done to better screen social media activity to ensure the safety of all those that come to visit and live in the United States.”

Schumer pointed to a recent example of extremist online activity that hit close to home to illustrate the need to swiftly enact the Combat Terrorist Use of Social Media Act. A Rochester pizza shop owner last week pleaded guilty to using multiple social media sites to recruit for ISIL, including Facebook. Mufid Elfgeeh utilized 23 different Facebook accounts to “seek donations and declare his support for violent jihad and allegiance to the Islamic State and its leaders.”

“Simply put, the feds need a ‘status update’ when it comes to analyzing Facebook posts and other social media methods of terror groups, and this legislation will get us there,” Schumer said.

New York’s senior senator went on to say that even employers do social media checks on potential employees and that it makes sense for our government to do the same when it comes to potential visa holders. Schumer said this legislation must pass the Senate so that the federal government can better gather and assess terrorist social media messaging. He also mentioned the bill would require the U.S. to go on the offense with its own social media strategy to disrupt the recruitment and communications of terrorists groups with a more direct plan of action.