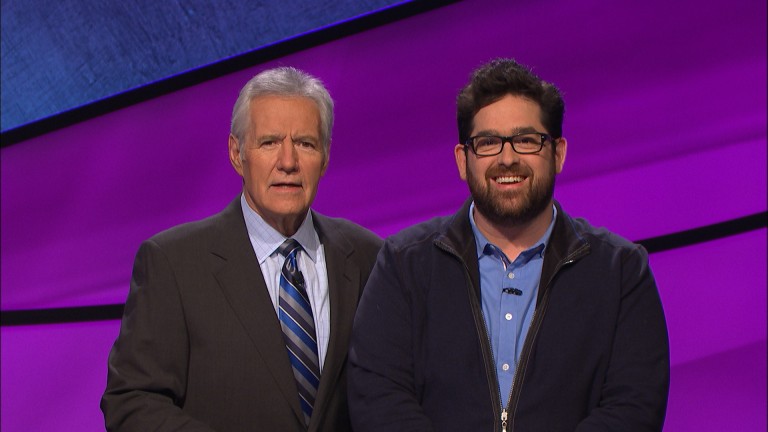 PHOTO: Though he finished in third place, Forest Hills resident Brian Rafferty last week was able to remove a big item from his Bucket List: be a contestant on “Jeopardy!” which has been hosted by Alex Trebek for the past 32 years. Photo Courtesy of Sony Pictures Television

Borough native Brian Rafferty has always been something of an information junky, with an abiding aptitude for esoteric trivia and quirky nuggets of information.

So, when Rafferty, a former journalist and newspaper editor who now works as a supervisor in the Long Island Rail Road’s Public Information Office, announced he would be a contestant on the long-running quiz show, “Jeopardy!”, few were surprised.

“When I first learned of Brian competing on ‘Jeopardy!’ I thought, ‘If he wins, there’ll be no living with him!’” said Stanley Davis, manager of the Rail Road’s PIO. “But I believe I speak for our entire team in saying that we are excited for Brian and proud of his achievement. We realize that just making it this far is an accomplishment in and of itself.”

A 1993 graduate of the State University of New York at New Paltz, Rafferty worked as a reporter and newspaper editor in Virginia and the Big Apple before joining the LIRR in 2011.

Rafferty, 46, who grew up in Jackson Heights and now resides in Forest Hills, made his “Jeopardy!” debut last Thursday on WABC-TV in New York.

He said that getting on the show wasn’t easy; it was a process that took time and perseverance.

“About three years ago,” Rafferty recalled, “I was far along in the selection process but I just never got the call.”

That notice finally came last November, just before Thanksgiving, when Rafferty was informed that he had made the cut out of a group of about 70,000 applicants to tape for an upcoming episode in Los Angeles.

“It felt great to be selected for the show,” he said.

Describing the initial selection process, Rafferty said the show’s producers wanted “to see how people work in a game environment; they look for entertaining and engaging people who might be good on TV.”

From early on, Rafferty said he was always interested in trivia, and had “an ear for weird facts.”

“My grandmother was an elementary school principal and she ingrained in me the concept of learning something new every day. It always stuck with me,” he said.

As the youngest of four kids, Rafferty said he was always trying to set himself apart from his siblings by getting “the right answer and making a place” for himself.

“I had three older brothers who always knew the answer,” he added.

Asked what it was like going out to L.A. and taping “Jeopardy!”, Rafferty said the trip wasn’t too difficult, but being on the show was more “nerve wracking” than he thought it would be.

He said that rules and legal regulations surrounding the show are taken very seriously.

“All show questions are random, in addition to the order that contestants are picked to play the game…and it’s all in the interest of maintaining the integrity of the game,” Rafferty noted.

Indeed, strict laws that now govern game-show rules came about from the “Quiz Show” scandals of the 1950s, when it was discovered that several game shows were rigged by producers where contestants were given assistance in order to yield pre-determined outcomes.

Rafferty said that challenges of being a show contestant included mastering the timing element to buzz-in ahead of other contestants; which he said “wasn’t as easy as it looks.”

But, he admitted that by far the most difficult part of the filming process was having his wife, Christine, and 16-year-old daughter, Emma, there with him in LA but not being able to acknowledge them during taping due to show rules.

“We were told, ‘Don’t talk to [family members], don’t look at them, no eye contact,’” Rafferty reported.

Although he ultimately finished in third place—taking home a customary $1,000 prize—Rafferty acknowledged that he had been planning a trip to California for a while anyway, so it all “worked out.”