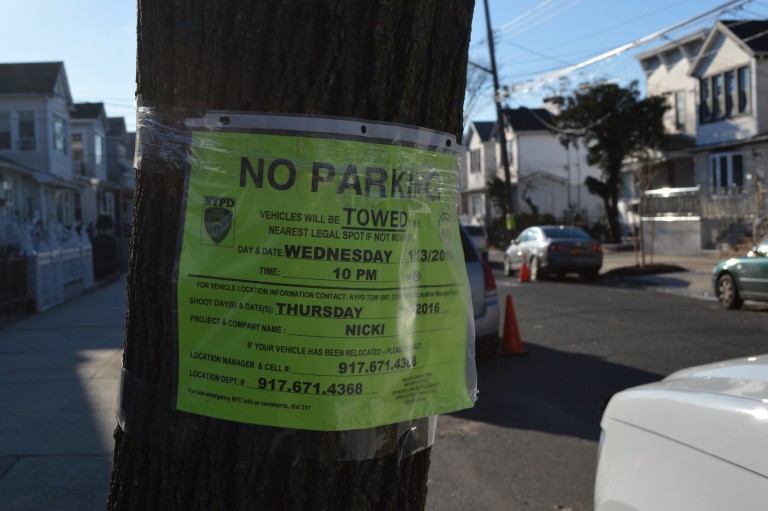 PHOTO: On 94th Street, residents were preparing this week for a temporary disturbance in their parking options as “Nicki” was being filmed for ABC Family. Forum Photo by Eugénie Bisulco

Nicki Minaj, rapper, actress, and one-time “American Idol” judge has set out on a new venture:  executive producing an ABC Family story about her own life.  The single-camera half-hour sitcom will be called “Nicki.”

Minaj, born Onika Tanya Maraj in Saint James, Trinidad and Tobago, and raised right here in Jamaica, announced last month on Instagram that she had hand-picked the cast filming scenes for the pilot this week in Ozone Park, evidently in locations near Woodhaven Boulevard and 101st Avenue. Among the talent are young actress Ariana Neal, whose audition tape made Minaj cry; Selita Ebanks, a former Victoria’s Secret model, will play Nicki’s mother, and Whoopi Goldberg, who will guest star as the Minaj family’s neighbor, “Miss Martha.”

There is no information available yet as to whether or not Minaj will appear on the show, though some Internet sources believe she might “travel back in time” to visit her former self.  Minaj is no stranger to comedy, having starred as “Lydia” in the Leslie Mann-Cameron Diaz-Kate Upton comedy “The Other Woman,” and often incorporating humorous elements into her songs and music videos.

One local lady who knew young Onika when she was at PS 45 in South Ozone Park is Minaj’s 5th grade teacher, Liz Smith-Breslin.  Smith-Breslin was featured in an E! Network profile on Minaj, as she was inspirational to the singer’s early interest in performing.  The first play of Minaj’s career, as Smith-Breslin describes it, was called “Keeping the Peace,” featured many popular songs such as Bob Marley’s “Three Little Birds,” and Minaj was a lead.  Smith-Breslin, who wrote the play, owns footage of that first gig, since she filmed the entire production.

“Nicki is a very loyal, very kind person.  She will make sure she is in her neighborhood and representing,” said Smith-Breslin, who has been in touch with Minaj since the E! story came out and affirms the star has remained humble throughout these years of fame.  No one from ABC Family has contacted Smith-Breslin about participating in the television project, though she said, laughing, that she’d love to play herself on the show.

“I was a teacher at a great time.  I made teaching fun, and I really connected with the kids,” said Smith-Breslin, the mother of a child actor.  “The fact that Nicki is filming here means that she is giving young people in New York jobs and the opportunity to fulfill the same sort of dreams that she herself had.”

According to Yahoo! News, in an effort to make the network appeal to a wider audience and reach women between the ages of 18 to 34, ABC Family will rebrand as Freeform this week.