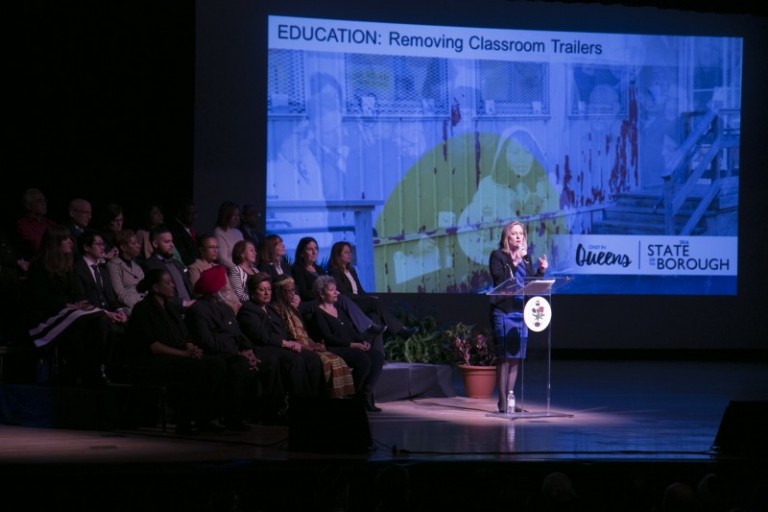 That was the theme—the distinct, singular identity of the World’s Borough as a resource for the City—of Borough President Melinda Katz’s second State of Queens address delivered last Thursday at Queens College.

“For us, 2015 was a year filled with progress and movement: boosts in tourism as the number 1 destination in the United States; reforms and capital improvements at our treasured public libraries; ridding our schools of classroom trailers that are clearly past their lifespan; launching visionary initiatives in Jamaica; breaking ground in Hunters Point; post-[Superstorm] Sandy re-openings in the Rockaways; and, of course, bringing the World Series back to the World’s Borough,” Katz said inside Colden Auditorium.

And 2015 was the year of Queens as a destination: dubbed “NYC’s Coolest Borough” by Condé Nast Traveler; ranked number 1 on Lonely Planet’s “Best in the U.S.”; MSNMoney’s Top 15 “Hottest American Cities.”

“Over 12 million people visit Queens every year, and indeed, visitors from around the globe flocked to Queens in 2015, affirming the borough’s status as a top international destination, both of choice and, just as significantly, in its own right,” Katz noted before rattling off myriad “Only in Queens” items, including:

Only in Queens “will you find the most diverse place on this planet.”

Only in Queens “will you find the vibrant celebrations of heritage and culture that you won’t necessarily find along Manhattan’s Fifth Avenue, from the birthday procession for Lord Ganesha, to the Colombian Independence Day Parade, to the Ecuadorian Parade, to the Bolivian Parade, and the Festival de las Flores.”

Only in Queens “will you find the Queens International Night Market, modeled after the popular open-air night markets of Asia, which debuted here last year.”

The three-word phrase, Only in Queens, heralds the distinct character of the borough—a local identity with a global vision.

“…and we are the place to be,” Katz said. “Folks increasingly want to visit here, build here, spend their money here.”

That singular identity will have a palpable impact on the Big Apple and beyond.

“Because what is Only in Queens today, I believe, is the norm for the future of our country,” Katz said. “And we are creating an unbelievable template.”

Katz went on to cite John F. Kennedy International and LaGuardia airports as the city’s “aviation gateways” that can be found Only in Queens.

“Thanks to the work of Gov. [Andrew] Cuomo’s Airport Advisory Panel, on which I have had the privilege of serving, there will be a comprehensive vision for redeveloping both airports for the 21st century,” she said. “We can’t plan for pre-dated technology. We must plan for infrastructure and technology of the future. It will require innovative thinking, but must also be a vision that takes into account the communities. Having a seat at the table for this historic undertaking has given me the ability to voice the hardships faced by the neighborhoods around both airports, and that includes noise, lack of parking, increased traffic and pollution. That is why the Panel included – in its recommendations for the LaGuardia re-design – an accessible cell phone lot, adequate parking capacity on airport grounds, and consolidation of rental car companies in and around the neighborhood into a single facility on the airport.”

Queens’ identity as a hub of growth depends on reliable mass transit, Katz noted, before trumpeting transportation projects such as the full reconstruction of the Jamaica Bus Depot; the signal modernization for the E, F, M and R lines along Queens Boulevard; the complete overhaul of 16 borough subway stations; and the renovation of the Long Island Rail Road stations at Hunters Point in Queens West and Murray Hill in Flushing.

“We also look forward to the Five-Borough Ferry Plan which will begin implementation in 2017. This will be done citywide in two phases. The ferry will stop in Hunters Point South, Long Island City, Astoria and yes…the Rockaways,” Katz beamed. “Just so you know, ALL of the ferry stops in Queens will be up and running in the first phase by 2017. This will be a great step forward in making transportation in the City of New York a first-rate system.”

Katz also recognized that meeting all of the challenges of the future won’t be easy. But, as she noted last Thursday, they never are.

“Just like getting rid of decades-old classroom trailers wasn’t easy. And getting 1,600 gallons of paint onto a towering steel structure under the scorching hot sun, wasn’t easy. And passing citywide policy to cut massive red-tape so survivors could rebuild wasn’t easy. And revitalizing whole neighborhoods into New York’s hottest markets wasn’t easy.”